#WeAreAllEngland: football could bring England together for Euro 2016

The England football team unites people of all races and faiths more than flags, St George’s Day or any other symbol of English identity, according to new research released today, one month before England competes in the Euro 2016 football tournament in France, writes Steve Ballinger. 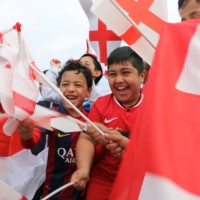 The findings are released to mark the launch of a new campaign called #WeAreAllEngland which aims to get people from all backgrounds in England to come together to celebrate our shared identity.

The #WeAreAllEngland campaign will encourage thousands of people, from all faiths and ethnic backgrounds, to show their support for the England team by posting and sharing a picture of themselves supporting England, or doing their ‘England goal celebration’, on Instagram, Facebook and Twitter using the #WeAreAllEngland hashtag. 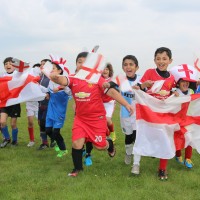 When the England team runs out at Euro 2016 we’ll all get the flags out together and shout ‘Come on England’. But outside the stadium, we English can struggle to show the pride we all feel in our nation. Some people worry about whether they’re allowed to celebrate Englishness, while others aren’t sure if they’re invited to the party.

#WeAreAllEngland is a simple campaign to show how the England team brings us all together – and that England is at its best when we all feel we can belong to it.