Children from two Bradford primary schools, one with mostly Asian pupils and the other majority white, will come together on Remembrance Sunday to lay a wreath at the Bradford cenotaph made of giant poppies that they made together, commemorating WW1 soldiers of all backgrounds.

135 children from Girlington Primary School and Eldwick Primary School took part in an event to learn that soldiers from all backgrounds – from India and what is now Pakistan, the Caribbean and Australia as well as from Britain – fought side-by-side in the First World War.

The children made giant poppies to remember individual WW1 soldiers from different backgrounds – soldiers like Khudadad Khan, a Muslim from present-day Pakistan, who was the first South Asian soldier to be awarded the Victoria Cross for bravery. A new video of the schools’ event is released today.

The event is part of Remember Together, a new initiative to promote integration by bringing people from different faiths and ethnic backgrounds together to mark the Centenary of the First World War Armistice. Remember Together is a partnership between integration thinktank British Future and the Royal British Legion, as part of its Thank You campaign – in Bradford it is working with The Linking Network, which has been linking schools since 2001 to promote understanding and connection between children from different backgrounds.

Similar events are taking place in London and Derby. Imams from across the UK have also come together as part of Remember Together to learn about the Muslim contribution to WW1. They will give Remembrance-themed sermons in mosques this Friday. 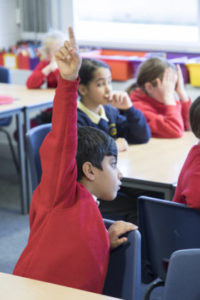 “Our children come from a predominantly Asian background and I don’t think a lot of them knew that people who fought in the First World War were from a range of different continents including the Indian sub-continent. That’s really important for their history.

“The work that we saw is a real testament to the fact that they don’t hold any prejudices or barriers and can work very happily alongside each other. It’s been lovely to see the children working together and remembering together. They’re looking forward to Remembrance Sunday even more this year because it will mean a bit more to them.”

“We need to be grateful to the people that fought for our country and died for us.”

“If they didn’t fight in the World War then we wouldn’t even be here today.”

The armies that fought for Britain in 1914-18 looked more like the Britain of 2018 than that of its day. British troops fought alongside soldiers from across the Commonwealth, including over a million Indian soldiers, 400,000 of them Muslims from present-day Pakistan.

Awareness of the Commonwealth contribution to WW1 has grown over the centenary, with more than two-thirds of the public (68%) aware of the service of Indian soldiers; but only 22% of people know that thousands of Muslim soldiers fought for Britain3. 77% of the public agrees that teaching this shared history would be good for integration in Britain today.

Sunder Katwala, Director of integration the thinktank British Future that is coordinating Remember Together, said:

“The Centenary of the Armistice makes Remembrance this year even more special, with more activity than ever before in Mosques and Gurdwaras, as well as Synagogues and Churches. That reflects the growth in public awareness of how those who fought together a century ago were just as diverse as modern Britain – and how a commitment to remembering that shared history together offers a powerful counter to those who seek to divide us today.”

“The men who served a century ago gave up their tomorrow for our today. In such a young and diverse city as Bradford it’s important we don’t lose sight of that sacrifice – and how our shared history is something we all have in common.”

“Linking schools was started in Bradford over seventeen years ago because people could see how important it was for children to meet and work with others from a different background. Remember Together creates a point of contact between students who may have thought they had little in common – contact which builds understanding and undermines prejudice. The two schools linking through Remember Together are the very first pair of linking schools in Bradford and have been bringing their students to learn together through the school year since 2001.”