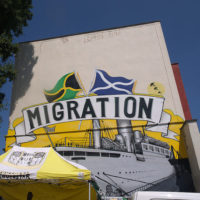 Nicky Morgan, David Lammy and Tim Farron are among the dozens of MPs, Peers and civil society leaders and organisations who have written to The Times today to mark Windrush Day.

Every year, they suggest, 22 June should be a moment when we acknowledge and give thanks for the positive contribution to Britain from those who have come here from overseas.

One-third of those on board the MV Windrush were West Indian RAF servicemen, coming back to Britain after serving in the Second World War.

This was not the beginning of Britain’s long migration history but merely a new chapter in a much longer story.

The letter marks the beginning of a week of celebrations, starting with a thanksgiving service at Westminster Abbey today and culminating at City Hall with Arrival: Celebrating the Windrush and those who followed on Saturday 30 June.

The letter to the Times reads:

Friday 22 June this year marks 70 years since the MV Empire Windrush arrived at Tilbury Docks in 1948.

Its passengers, many of them former RAF servicemen from the Caribbean, went on to write a new chapter in Britain’s long history of migration, contributing to our economy, our society and public services like the NHS.

This year’s anniversary has a particular resonance. The public outcry over the treatment of the ‘Windrush Generation’ has reminded us all of the importance of treating those who came to contribute to Britain with decency and fairness.

The 70th anniversary is a fitting moment to officially recognise Windrush Day, as an annual acknowledgement of the positive contributions made by those who have come from overseas to our common home.

As well as celebrating our history, Windrush Day should look forwards too, presenting a positive vision of our multi-ethnic and multi-faith Britain as a shared society which is welcoming, just and fair to all.