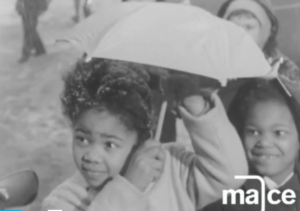 Angela Spence was just five when Enoch Powell thrust her school into the headlines. She reflects on growing up black and British in Wolverhampton in the shadow of Powell’s speech.

As a small child I remember seeing my image on the television. It was the year before the moon landing. I have no recollection of the piece being filmed, but there I was: a little girl with snow in her hair, holding a light blue umbrella.

I was in the first cohort of five-year-olds who attended Wolverhampton’s newly opened West Park Junior School, as it was called then. Enoch Powell had singled-out the school in his infamous 1968 Birmingham speech, as having classes with only one white child. That was a blatant misrepresentation: the school was diverse even then with a mix of children learning and playing together. Jackie and Susan, two white girls, were among my friends.

I am the eldest of five children and we all went to West Park. We lived very locally in a house purchased by my parents in 1963, in a street with families from Fiji, Poland, South East Asia, the Indian sub-continent, Italy, Jamaica, Barbados, Montserrat and the United Kingdom. I enjoyed my school days.

I grew up knowing the content of the ‘Rivers of Blood’ speech but I have no recollection of an epiphany when I realised I was Black. I grew up in a very positive, pro black environment for which I cannot thank my parents enough. They were our first teachers.

There have been watershed moments in British history around the issue of race, racism and resistance. I recall the disturbances of the 80s and the Scarman Report. The death of Cynthia Jarret. The death of Clinton McCurbin. The death of Stephen Lawrence and the Macpherson Inquiry. After each occurrence we heard that “lessons will be learned.” The disturbances of 2011 were a reminder that for many there was still a sense of hopelessness coupled with little or no improvement in their lives.

Last year I received a link via WhatsApp from my sister. It was the TV footage with me, a five-year-old child invested with hope and promise for a bright and happy future. Have things changed since then? Yes they have. We have legislation that prohibits certain actions and words; people have become more sophisticated and the language has changed.

Have things improved? This depends how we measure improvement. Records show a black presence in the West Midlands in 1650 yet much is made of the election of the first black MP for the West Midlands in 2017. Our diversity is cause for celebration but I understand too that, for some, this is difficult to take on board. The current national and international landscapes do much to feed the fear of difference and otherness and gives licence to some to behave badly. Am I hopeful that things will get better? Yes, I am.

I am forever the girl with snow in her hair, now a permanent fixture, holding the blue umbrella.

This article is an extract from Many Rivers Crossed: Britain’s attitudes to race and integration 50 years since ‘Rivers of Blood,’ published by British Future