1. St George’s Day is on April 23 each year, marking the date when the saint is said to have died in 303AD.

3. We don’t do enough to celebrate poor St George. Two-thirds (66%) of people in England still feel that St Patrick’s Day is more widely-celebrated here than St George’s Day. Only 7% believe that St George gets more attention.

4. We’d like to do more, though – three quarters (76%) of those surveyed want St George’s Day celebrated more or at least as much as St Patrick’s Day. Many people, however, are simply put off because they feel nothing much is happening in their community and the day often goes by unmarked. We need to do more to celebrate Englishness and a nationwide St George’s Day party, with everyone invited, would be a great way to bring people together.

5. Salisbury City Council caused a storm in a balti dish this year when they told street food vendor Tania Rahman that she could not sell chicken tikka masala at their St George’s Day event, as they were only accepting ‘English-themed food’. They changed their minds when she pointed out that it’s become one of the nation’s most popular dishes.

6. Aside from England, other countries that celebrate St George’s Day include Canada, Croatia, Portugal, Cyprus, Greece, Georgia, Serbia, Bulgaria, Romania, Bosnia and Herzegovina, and the Republic of Macedonia.

7. St George’s Day is not a public holiday in England or the rest of the UK – while the Irish get a day off for St Patrick’s Day and St Andrew’s Day is a bank holiday in Scotland. 41% of people cite the lack of a day off as a reason why St George’s Day isn’t celebrated more. (Wales doesn’t get one for St David’s Day either). But the question has been in raised in parliament every year since 2006 – so it might still happen. 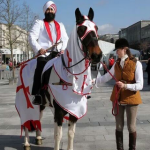 not yet a holiday, there will be plenty of people dressed up in chainmail slaying pantomime dragons this week. Londoners will celebrate England’s patron saint in Trafalgar Square on Saturday 25th at the Feast of St George; Liverpool hosts its first St George’s Festival from 24-26 April; while the Midlands claimed to hold the country’s biggest St George’s Day parade in West Bromwich, a little early this year on 20 April. In Plymouth they will have armoured re-enactors showing how to slay dragons with real swords – and Chaz Singh will once again lead the parade on a horse in his St George’s flag turban.

9. On St George’s Day 2012, British Future wrote to Prime Minister David Cameron urging him to create an ‘anthem for England’ that could be sung at England sporting events – just as Scotland has Flower of Scotland and Wales has Land of our fathers.