Clamp down on fraudsters, not foreign students 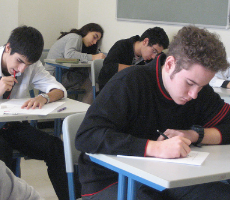 A BBC Panorama investigation has revealed that a company contracted by the government to conduct English language tests for foreign students – a requirement for student visas – has been fraudulently passing students, in some cases allowing other people to sit the test for them. This needs sorting out quickly before it erodes public confidence in the student visa system, writes Steve Ballinger.

The situation needs to be investigated thoroughly and swiftly. Any other organisations who are caught defrauding the system should have their contracts torn up and, if appropriate, be subject to legal proceedings.

The company, English Testing Services, is reportedly one of the biggest of its kind. ETS sets the exams but does not appoint the invigilators, and told BBC Panorama that it “does everything it can to detect and prevent” cheating. The government has suspended its contract in response to the Panorama investigation, which will be broadcast on 10th February.

It’s important that the government acts to maintain public confidence in the student visa system. Foreign students are good for our universities and good for our economy. Their fees provide the top quality teaching and facilities that make British universities some of the best in the world, to the benefit of British and foreign students alike. Attracting the brightest and the best students provides the British economy with the skills we need to compete with China and the US. And in many university towns, foreign students keep local traders in business – whether they’re shops and restaurants, taxi firms or private landlords.

Research shows that the public can see the benefits foreign students bring to the UK. But most people will be appalled to find that companies and individuals are abusing the system for their own profit, fraudulently allowing people to gain or extend student visas.

We need a clampdown on these fraudsters, not on genuine foreign students.