Four years on, are we still the Britain of Danny Boyle’s Olympic ceremony? 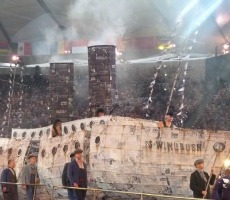 Can it really be four years since the Olympics came to London? As Rio prepares to light the flame for the next Olympiad, it must be so.

Many of our memories of that summer will be personal. For some, going to the Games themselves: taking my children to watch equestrian events in Greenwich Park, undeterred by the occasional shower, or going out to watch the Olympic torch being carried through our streets.

The biggest moments were shared across the nation: that triple gold medal hour for Mo Farah, Jessica Ennis and Greg Rutherford on the middle Saturday that British athletics will find it difficult ever to surpass. Above all, there was Danny Boyle’s opening ceremony – the night when 27 million of us stopped to take in the sweep of our island story of how we, the British, became us, the people we are today. How the industrial revolution came to our green and pleasant land; the democratic changes sparked across a century of war and peace; the soundtrack of our lives through these decades of social and technological change.

That Olympic summer surprised people in its ability to bring the country together. Four years on, Britain looks back on it in the wake of a big moment in our post-war political history, a referendum vote that divided us politically over our relationships with Europe, and illuminated many of the economic, social and cultural divisions in Britain today.

The most economically and culturally confident sections of our society have had the unusual experience, on the losing side of the referendum vote, of feeling disoriented and discombobulated by defeat. So Remain voters in the 2012 host city may have watched the Imagine documentary on the making of the opening ceremony with a sense of nostalgic reverie, understanding, for the first time, the appeal of the Faragist slogan ‘I want my country back’, albeit looking through the other end of the telescope.  Some will feel a sharp sense of dissonance between the resonance of the opening ceremony for them and the referendum outcome.

Indeed, the ceremony’s writer Frank Cotterill-Boyce has voiced this sense of dissonance, casting the referendum campaign and its aftermath as a ‘kind of anti-opening ceremony’. Yet the clue is surely there in the numbers: with 27 million Britons tuning in that night, this could not be a story of Britain that belonged to the 16 million who voted for Remain or the 17 million who were part of the 52% majority.

There is plenty in that same opening ceremony story, scripted by Cotterill-Boyce, to resonate with the sense of identity and pride which underpinned the choice of many fellow citizens to vote Leave, too. It was the story of how our country made and remade the modern world, the spectacular forging of those Olympic rings representing the industrial heritage of a country that took pride in making things before the information age arrived, where popular pressure from the suffragettes and the Jarrow marchers extended democracy and created a welfare state.

And this is part of what it means to be a nation. There are histories and cultural meanings that are shared by those who take very different views on the biggest political questions. Our popular national institutions – the monarchy, the NHS or the army, and indeed Team GB itself – belong to those on both sides of the issues that divide us by party or cause when we go to the ballot box.

Indeed, the ceremony also told a story of British exceptionalism. The choice to join the Common Market in the 1970s did not quite make the cut for the moments depicted in the opening ceremony. Our four-and-a-half decades as reluctant members of the European club are an important part of our recent political history, deciding the fate of more than one Prime Minister, but harder to place in the grand sweep of our national story across the centuries.

Peter Hitchens, taking part in a Newsnight discussion with me this week, was having none of this. Elevating the position of professional curmudgeon almost to that of being a national treasure, he could not see how a ceremony that was positive about the 1960s, and included rap music, had anything to say to those with a more traditional sense of identity.

Hitchens felt conscripted into a sense of ‘compulsory joy’, complaining of feeling pressured to say that he liked the ceremony – which is, naturally, a matter of personal taste and opinion. But that anti-ceremony view was not very widely shared. The ceremony’s inclusion of Jerusalem, Nimrod and Abide with Me, as well as Dizzee Rascal, may explain why its story of British pride did prove broadly popular with Britons of both a conservative and a liberal disposition. People did feel that the ceremony represented their sense of Britishness, by a margin of 65% to 7% in attitudes research conducted shortly after the games, with similar margins of six-to-one agreeing that it was entertaining and that it represented a positive balance between traditional and modern.

Perhaps that was even more striking in the Scottish referendum of 2014, a vote about whether to break up Britain itself. Danny Boyle was much more aware, in 2012, than the London Olympic organisers would have been in 1948 or 1908 that British identity had become a more complex thing. His ceremony opened with songs from the four nations and images of them competing against each other on the rugby field.

The themes of the opening ceremony featured in the Scottish independence referendum too, even if Danny Boyle’s Olympic poetry got lost in the dour sceptical prose of a Scottish pro-Union campaign that became rather more “No Thanks” than “Better Together”. What was striking was how the pro-independence side staked its own claim to those shared and popular British institutions. There was reassurance about the monarchy and the BBC as well as an argument about keeping the pound. Indeed, the Yes campaign’s final push placed just as much emphasis on the NHS as the opening ceremony had. ‘We must leave Britain to keep Danny Boyle’s flame alive,’ was the counter-intuitive message of a Yes campaign which argued that Scottish independence was now necessary to preserve the jewel in the crown of the post-war British welfare settlement.

Most pro-independence Scots who wish their team was carrying their own flag into the Rio stadium will cheer for Andy Murray during these Olympics, just as their political opponents would have done had the referendum result been different. That doesn’t make sport more important than politics – but the value of national identity is that it can unite those who are deeply divided over even the most foundational issues.

We are still the country we were during that Olympic summer – a country that can be anxious and confident, with a strong sense of our history and identity, and with different views about what that should mean for the choices we make today. Perhaps it is our awareness that we can be a fragmented and fractured society – by class, by place and by politics – that gives us an appetite for the moments that bring us together.