Sajid Javid: ‘We’ve welcomed people and it’s made us stronger’ 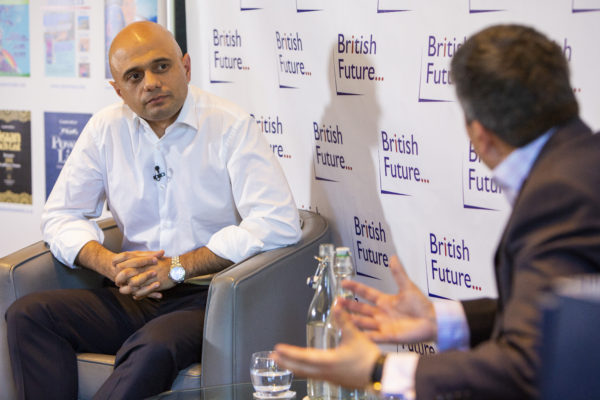 Sajid Javid celebrated Britain as “one of the most successful multi-racial countries in the world,” at a British Future event last night, writes Steve Ballinger. The Home Secretary, a candidate to be the next Prime Minister in the Conservative leadership election, discussed his priorities on immigration and integration for the future with British Future’s Director Sunder Katwala.

“I think it [immigration] has been fantastic for Britain,” Javid told the audience at the Royal Society. “I think we would be a much poorer society today – I don’t just mean economically but culturally and in every way –  if we didn’t have the approach to immigration we’ve had by successive government over the last few decades. We’ve welcomed people, whether it’s from the commonwealth or more recently European citizens, and it’s made us stronger.”

“I would not have the [net migration] target,” he added. “I think it’s nonsense to set a target that you know you can never meet, the tens of thousands, and also it should be led by what you think the country needs – and that changes over time as well…. It’s something that we can take a much more sensible, flexible attitude to.”

The Home Secretary also said that he would do more to encourage international students to both study in the UK and to stay and work here after they graduate.

“I want to see more international students come to our country,” he said. “If they’re coming here to study at our great universities, and if they want to work afterwards, we should make it easier for them to stay and work. We need a more positive attitude to this and I think the country would welcome it.”

He described “one of the most moving experiences I’ve had as Home Secretary,” when he met a Syrian refugee who had been offered sanctuary in the West Midlands through the UK’s refugee resettlement programme. “She looked at me and she said that if you hadn’t made the decision you made… I would be dead right now. And that should make us all proud of this country and what we do to help people around the world.”

“We should carry on with that national resettlement programme because it’s one of the best ways that we can help and do our bit.”

Javid also discussed integration in Britain, an issue he grappled with first as Communities Secretary and now in the Home Office.

“In society there are layers of belonging and one of those layers of belonging is speaking the language,” he told Sunder Katwala.  “If there was one thing I could do to have better integration it would be to focus on English language. I would put rockets under that programme, in fact I would change the whole programme and make it as easy as possible to reach out to people. Britain is their home and we should help them to learn English.”

While Britain has done better than most European countries at promoting integration, he said, social cohesion is at risk from politicians exploiting divisions.

“Some politicians have decided that one way they think you can get votes is to appeal to division, to exacerbate division, to get angry people to vote for you. I think that’s the worst thing you can do,” the Home Secretary said. “We can’t have a society where our main political parties think that the main way to win votes is to exploit division.”

Watch ‘Who do we want to be? In conversation with Sajid Javid’ here