The British public believe that Britain should offer asylum to Afghan interpreters who worked for British troops, according to a new YouGov poll for British Future, writes Sunder Katwala.

Of those who have an opinion, 60% believe that Britain should allow these workers to settle here while four out of 10 oppose the call.

Conservative, Labour and Liberal Democrat voters all support the call for protection for the interpreters, while those who intend to vote UKIP divide narrowly against it. 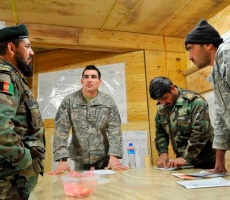 Overall, 17% of respondents did not express an opinion on the issue, with 49% in favour and 33% opposed among all respondents to the YouGov poll, which surveyed a nationally representative sample of 1,851 British adults between 1st and 2nd May.

Both younger and older Britons believe that Britain should allow Afghan workers to settle here. There was little difference in the levels of support among the over 60s, who favour the asylum call by 50% to 32% (+18), or the under 24s, who support protection for the interpreters by 50% to 35% (+15%).

Over 80,000 people have signed a petition organised by campaign group Avaaz calling on the British government to grant asylum to the interpreters. Dave Garratt, Chief Executive of Refugee Action, a leading charity that supported the successful resettlement of Iraqi interpreters in the UK, said:

“We call for a fully-funded support programme to aid the relocation, resettlement and successful integration of Afghan interpreters and their immediate family members in the UK. The results of the poll reveal a divide between the UK Government’s reluctance to relocate Afghan interpreters to the UK and broad British public opinion in favour of their resettlement. We must not abandon people whose lives are in grave danger from persecution, as in the experience of Afghan interpreters who worked on the front line with British forces who now live in constant fear of reprisals from the Taliban. Like all individuals seeking asylum in the UK, Afghan interpreters deserve to be treated with dignity and respect.”

The British people believe that we owe these brave Afghan interpreters a debt of honour. Politicians are rightly thinking how to engage public anxieties about immigration. This poll should remind them of the broad public support for upholding our traditions of offering protection to those who need it.

“Whilst we should not encourage anyone to leave Afghanistan, we should make it abundantly clear that we will support any combat interpreter who decides to stay and enable any who want to come to the UK to do so. These people have stood by us through many difficult years, often putting themselves in great danger. Common decency dictates that we must stand by them.”

General Sir Mike Jackson, the former head of the British Army, told the Sunday Times newspaper: “These people have risked their lives, some of them for years, to help the British armed forces. There’s a moral duty upon us as a country to ensure they are looked after.”

All figures, unless otherwise stated, are from YouGov Plc. The total sample size was 1,851 adults. Fieldwork was undertaken between 1st and 2nd May 2013.  The survey was carried out online. The figures have been weighted and are representative of all GB adults (aged 18+).