No place for prejudice 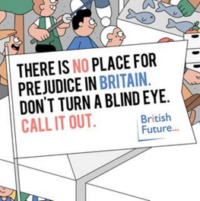 Most people agree that there should be no place for prejudice in Britain. Only a small and toxic minority hold hateful views – but when they voice them, it still causes immense harm.

So how, in these polarised times, do we reach and mobilise as broad an audience as possible against hatred?

No place for prejudice is a new social media campaign from British Future which urges everyone to stand up to prejudice if they see it.

The campaign is founded on two insights. Firstly, while anti-prejudice norms are widely held across the public, many anti-prejudice communications appeal most strongly only with those who are most committed.No place for prejudice seeks to mobilise not just liberal graduates but a broader audience, the decent majority who agree that prejudice and hatred are wrong and should have no place in Britain today.

Our recent research groups in the West Midlands, examining public attitudes to race and integration for the Many Rivers Crossed report, also found that while most people are clear about their opposition to prejudice, they don’t know what to do if they see it. So we’re providing guidance on what you can do if you witness hatred on the street or on public transport – including signposting to the police and specialist anti-prejudice organisations where you can report hate crime.

So the No place for prejudice campaign looks quite different to anti-prejudice campaigns you might have seen before. It’s not shocking or tough to watch. In fact, it depicts a light-hearted and rather typical scene of people going about their business in a normal market town. It presents an everyday picture of Britain in which most people agree there is no place for prejudice – but somewhere, something is wrong. A minority do still hold prejudiced views – and we all have a shared responsibility to stand up to hatred if we see it.

The campaign was created with the support of Create v Hate, a new initiative from Facebook that supports anti-prejudice organisations to produce powerful social media campaigns. We are grateful for the pro bono creative work by the agency Publicis, together with production support and advertising credit provided by Facebook.

British Future will research and evaluate the public response to this social media campaign and share lessons from it, as part of our ongoing work alongside national and local civic society actors who are seeking to engage the public with effective anti-prejudice messages.

No place for prejudice runs on British Future’s Facebook page from Monday, with new content posted over four weeks. Do check it out.