Net migration statistics: time for a ‘Reset’ on immigration policy? 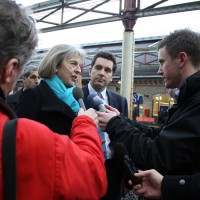 New net migration figures, released today by the Office for National Statistics, showed net migration for the year to March 2016 at 327,000, slightly down from the same period last year.

“When the net migration figures and the target remain so far apart, it’s no surprise the public has lost confidence in the Government’s competence on immigration.

“Theresa May will want to get away from the quarterly embarrassment of the net migration statistics now that she’s Prime Minister. The Brexit decision does offer her a ‘Reset moment’ on immigration, as major policy changes are inevitable.

“It’s too soon to start rethinking targets now – no-one could sensibly predict the best immigration levels for the UK until we know what our Brexit deal looks like.

“We should start work on a Comprehensive Immigration Review by consulting the public on the choices they think we should make. That would be a first step towards an immigration policy that is effective, fair and trusted by the public.”

A report released today from British Future, What next after Brexit? Immigration and integration in post-referendum Britain, reveals that the public does not believe that the UK will meet its net migration target, even after leaving the EU.

Only around a third of people (37%) think we are likely to meet the net migration target in the next five years, even after Brexit, according to ICM polling. More think we are not likely (44%). Of those who take a view (ie excluding those who say ‘Don’t Know’) 54% think it is unlikely, 46% likely.

The report calls for a Comprehensive Immigration Review, undertaken at the highest level of politics, to examine how migration can help provide the economy with the skills that it needs, as well as hearing the case for reductions in other areas. It also needs to consider family migration and public support for increasing the number of international students.

It also recommends increased investment in a system that works. It recommends improved funding for the Home Office to handle borders and immigration while coping with a higher workload as a result of Brexit. It also calls for the Government to honour a Conservative manifesto commitment for a fund to manage the local impacts of migration, particularly in areas of rapid population increase, focusing on housing, school places and pressures on NHS services.

The new report can be downloaded at http://www.britishfuture.org/articles/what-next-after-brexit/