Today’s speech from David Cameron, focusing on illegal immigration, might help reassure some members of the public who are worried that our immigration system isn’t working and isn’t properly enforced, writes Steve Ballinger. But as a response to today’s net migration figures – which have gone up again to 318,000 – it’s something of a distraction.

Those ONS immigration figures are a headache for a Prime Minister who promised to get that figure down to the ‘tens of thousands’ back in 2009. Targets can be a good way for the public to hold the government to account. Promises that aren’t kept, however – or promises that are downgraded to ‘aspirations’ – only undermine public trust on an issue where it’s already notoriously low.

People are worried about illegal immigration, and better enforcement of the law to stop British workers being undercut and migrant workers being exploited on low pay is no bad thing. But the net migration figure is almost entirely made up of people who are here legally, most of them working or studying. People will ask: ‘will these new measures help get the numbers down?’ The answer is ‘probably not’. 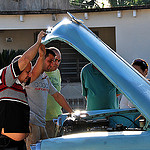 The PM is sticking to his target and he should, therefore, set out some kind of plan as to how he’s going to meet it. Today’s measures, and existing plans to restrict access to benefits for EU migrants, might deter a very small percentage, but it’s hardly going to turn 300,000 people into 90,000, when most are here to work, not to claim.

Perhaps instead, he should face up to the fact that more people are coming to Britain to work, mainly from the EU, because our economy is doing well – and look at what can be done to manage the impacts that population increases are having on public services and housing.

Writing in The Independent today, together with thinktanks Demos and Bright Blue, we propose a new approach. One that uses the gains from increased immigration – more people working and paying taxes – directly to manage some of the pressures. These tax revenues shouldn’t just disappear into the Treasury coffers. A ‘contribution formula’ should ensure that when net migration is high, as it is now, more money goes into the ‘Controlling Immigration Fund’ promised by the government to help handle the pressures on communities and services.

That formula should also ensure that the money in the fund goes directly to the towns and cities most affected by immigration. With better monitoring of local population changes, we should be able to ensure that if, say, Southampton is hosting a large proportion of new migrants, it gets more funding to pay for the school places, doctor’s surgeries and new homes that it will need.

By sticking to his net migration target, the Prime Minister has volunteered to be beaten up every three months when the ONS stats come out, until those numbers start going down instead of up. He knows that most of the workable measures to help make that happen, without damaging our economy or our world-class universities, are already in place.

A practical response to this quandary would be to put forward some practical (and funded) measures to handle the pressures of high immigration. This might not satisfy popular appetites for getting the numbers down, but it will reassure the public that something sensible is being done. The alternative – shouting “look over there!” and hoping to distract the public until next quarter – may prove risky when trust is already so low. Let’s see what they come up with for August.