The panellists started by looking close to home at politicians’ failure to connect with the public and the media’s reporting of debate. 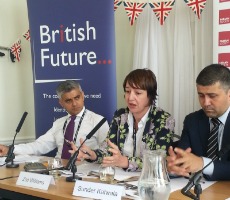 The public are “alienated by MPs’ lack of real life experience,” argued Williams, adding that  “too many go straight from a think-tank to parliament.” Lammy agreed: “When all three party leaders did PPE at Oxbridge it hardly connects them with the day-to-day experience of voters.”

Meanwhile, Khan complained that the nature of the political system distances politicians from voters. He spoke of his time as a government minister when he would have to set aside specific time in his diary in order to speak to “real people”.

Harris focused his ire on the media, suggesting much of what we call “populism” is really led by tabloid media. He said: “Tackling media ownership is important.” Williams also thought this was an important element. She felt that the media’s polling to reflect “popular opinion” was often slanted to find the result they wanted.

The question of authenticity among politicians was raised. Nigel Farage’s cheeky chappie persona is perceived as authentic, even though he is the privately-educated son of a banker, said Khan. Lammy continued on the same theme, picking some unlikely examples of politicians who do it well. “Politicians have massively underestimated Boris,” he said. “His  authenticity has chimed with the public.”

He also cited Angela Merkel and Margaret Thatcher as politicians who were “comfortable in their own skin.”

What should politicians do, then? Don Flynn from the Migrants Rights Network spoke from the floor. “You’ve got to engage the public on issues like immigration, even if it’s difficult,” he said. Khan concurred. “Politicians must listen to concerns on the doorstep and explain how they’re going to address them.”

Summing up the event Katwala offered some hope to politicians looking to engage on the doorstep with public anxieties about immigration. “It’s wrong to say that public opinion is toxic on immigration,” he said, referring to Vince Cable’s recent defeatism. Polling from Lord Ashcroft and from British Future has found a much more nuanced feeling among people as a whole. Politicians must resist the urge to change the question and instead acknowledge and address their concerns.