What the public want on integration

“Obey the law, learn the language, play by the rules and contribute positively to British society. Do that, then you and your children deserve to be treated as fully and equally British citizens, and welcomed for the contribution you make to our shared society.”

That sounds like the type of integration “deal” which would reflect the instincts of most British citizens, based on the initial evidence of several pieces of attitudes polling and deliberative research carried out by British Future around the country across our first year, writes Sunder Katwala.

Integration has been moving up the political agenda, with Communities Secretary Eric Pickles giving his first major speech of 2013 to British Future and Policy Exchange today, just over a year after the government published its integration strategy.  Labour leader Ed Miliband also made integration an important theme of his One Nation approach to making a diverse society in a speech in Tooting in December.

While opinion polls can capture opinions on particular topics, smaller-scale qualitative and deliberative research can dig into how people come to these views, and what lies behind those attitudes revealed in the polling. 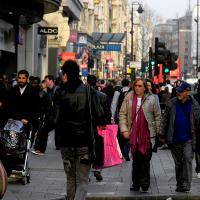 Public attitudes’ research group Britain Thinks ran four focus groups for British Future in Leeds and Fareham to dig into what people think integration means, and to explore how they think the process of integration works in practice.  As we wanted to explore the views behind the mainstream attitudes which attitudes polling shows are held by the majority, those with very strong views or extreme views were excluded. (For example, very broad public majorities reject the idea that you have to be white to be British). Participants broadly reflected the ethnic mix of the areas where the groups were held.

A clear sense of three different layers of integration emerged, as these Britain Thinks slides summarising the research shows.

So what struck us about these findings?

Firstly, there was strong agreement, pretty universal among the participants in these groups, about what the essential foundations of integration are: respect for the law; the ability to speak English; and the desire to contribute and to work were all seen as obvious and common sense requirements, in the realm of personal behavour. This reflects a robust and widely held sense of what many people think of as  pretty self-evident common sense foundations for integration. If somebody did not speak English, and did not intend to do so, then that would not only make it very difficult to fully participate in our civic, political life or the economy, but would also express a lack of interest in doing so.

Secondly, those foundations do unlock a broadly held commitment to fair treatment – that those who do play by the rules deserve to be treated as members of the British club.

But what also emerged from these discussion groups was an important sense of sequencing, in some ways a rather delicate dance of etiquette, around how this mutual respect should work. The sense which emerged was that it was being committed to ‘here’ – wanting to be here, and to join in – which should unlock a mutual respect for cultural diversity, particularly seeing the positive contribution of different food and music. More substantively, this also requires a commitment to freedom of religion and belief, combined with a respect for the views of others. But there is concern about and desire to reject of those demands which don’t seem to be about ‘fairness’, but rather seem to be “carve out” demands, voiced as appearing to want to live in a different country within a British society, which could undermine the idea of a shared set of rules we all must observe.

The third level of integration is about emotional attachment to British identity, and symbols of identity. These were given lower priority, particularly because of an understanding that this will take time. And participants also observed that they themselves differ about the Monarchy, or the wearing of poppies: the same choice was therefore open to new Britons who felt integrated, though a genuine emotional attachment to these or other British institutions would signal a felt sense of shared British identity.

The idea of personal “choice” was quickly voiced to immediately trump discussion of whether people should be judged by whether they watch the same TV programmes and films, or which sporting teams they support.

Deborah Mattinson, co-founder of Britain Thinks, said that “whilst the public don’t think about this in the formal language of ‘integration’ they do have very clear ideas about how both the immigrant and host communities can behave to ensure that”.

When attending a couple of the Leeds groups as an observer, I was also struck by how people do not find this an immediately accessible topic, though it was clear they thought the content was important.  Certainly participants were less fluent in expressing initial thoughts about the topic on a blank sheet of paper than they would be if asked about “immigration”.

Part of that is about language. The issue of how we live together, whether we have a shared society, and what playing by the rules means, do matter to people. The language of “integration” is less familiar – and other themes such as “community cohesion” or “interculturalism” considerably more so. It would be useful to think about how to translate the policy and academic language more often into the terms that people themselves use to talk about how we live together.

Another issue arises from people being sincerely committed to avoid expressing extreme views, but sometimes being unsure about how to find how the language to express a concern about segregation. Group participants seemed concerned to find areas of agreement, and approached areas of disagreement somewhat tentatively.  There were occasion where non-white participants might open up discussion of more ‘difficult’ issues, which was taken as a cue that the issue was not off limits, enabling the discussion to flow more generally. There were not sharp divisions between those from different ethnic backgrounds, with a shared sense of the importance of integration, and of avoiding discrimination too.

There are other areas of research on integration More work on how we think and talk about integration, and how to get the various balances right, will be useful and necessary.

Participants tended to focus on what new Britons themselves should do. That may be partly because the commitment to wanting to integrate is perhaps the most essential foundation of all. It would be useful to explore more what role they think British-born citizens should play. Many people are aware that there are barriers to opportunity in society – whether in terms of class, gender, race and other factors. These will affect integration opportunities and outcomes too. So it would be useful to explore further what people think the role of national or local government, business or other groups should have in breaking down barriers to integration. There is a strong sense that integration matters; does it follow that we can and should invest resources in it when resources are constrained?

There is strong evidence that new Britons have a strong commitment to integration, though many people may not expect that to be the case. It can be difficult for migrant voices to be heard whenever the integration debate becomes framed as a question of “them and us” – especially ‘why can’t they be like us?’ – rather than the two-way street of how we work together to make the new “us” work.  To some extent, the research suggests that Britons would like to ask new Britons to be idealised versions of the selves that we would like to be: patriotic and aware of our history; committed to their families; hard-working and finding the time to volunteer too.  Linking the question of integration of new Britons with citizenship for new adults and the norms across our society could be helpful.

There is also a tendency to conflate issues of new migrants with those of settled ethnic minority communities – and to overlook differences between types of migration. While views about the principles of “integration” deal seems fairly clear for those who want to become British citizens, an often overlooked issue is how an increasing  proportion of migrants are temporary migrants, with up to three-quarters of those who arrive saying they plan to stay up to a couple of years. What type of deal we have with these ‘denizens’, who don’t intend to become citizens, is much less discussed.

Those are all questions which could usefully be explored further in future. The contours of the “deal” which emerges from the initial research does suggest that this issue need not be one which proves sharply polarising.

There will always be some dissenting voices who sharply disagree on either the possibility or the value of integration in a multi-ethnic and multi-faith society, from a range of perspectives. Some believe that any multi-ethnic society is bound to fail; others are suspicious of all talk of integration being a coded form of deep distrust about diversity itself. Those are both minority views.

However, these findings suggest that there is potential for a broad social as well as political consensus which articulates hat our democracy needs to insist on for integration to work, but also on where the boundaries between the demands of common citizenship and the freedoms of personal choice should lie in a liberal and democratic society.