On 1st January 2014, Britain opens its borders to Romania and Bulgaria, in a moment being greeted less with fanfare and more with reluctance. A heated public debate has polarised around two viewpoints. Some demand that the government must stop this, though the Home Office says it is simply not legally possible. A counter-view is that the entire debate about free movement is irrational at best and often downright xenophobic. The noisy political and media debate feeds into another unfortunate view, namely that the public should not be listened to on immigration or Europe.

In British Future’s latest report, EU Migration from Romania and Bulgaria, we did the opposite – listened to the public’s views. We held workshops in Southampton, Reading and Bolton to find out how much people knew about the issues and what they thought could be done in response, followed up by a nationally representative ICM poll.

Despite impassioned polemics from all sides, we found considerable public uncertainty about the choices that Britain should make. This extension of free movement, and especially its timing, are certainly not popular – though a minority of one in six actively welcome it. Whether to stay in that club seems very much in the balance too: people are taking the option of getting out of the EU pretty seriously.

Mostly, the public want more information about what is happening, and feel the politicians have failed to give them enough.

Another finding reveals that the “generation gap” is very pronounced when it comes to the EU. We provided a list of potential risks of leaving the EU and asked people to rate how important they consider them to be. The gap between the responses of 18–24s and those aged 65+ is marked throughout, particularly so when it comes to free movement and the right to work abroad. This, along with jobs from inward investment, is an important concern for the under-24s, but it is the least important risk for the over 65s.

Given the eventuality of EU migration, what can be done moving forward? This question is also addressed in our report. We outline several areas the government can work on to ease public anxiety, such as ensuring employers can’t undercut existing workers by exploiting newcomers, promoting integration and contact, and ensuring that free movement does not leave the benefit system vulnerable to abuse. 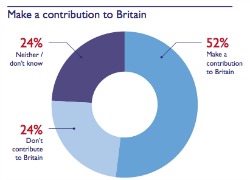 An overwhelmingly positive message revealed in the polls is that many have no problem with those who may have crossed a continent to work hard, or seek a better life for them and their family. Rather, the core concern is whether we have a system that handles migration fairly for all – citizens and migrants alike. This can be seen in our attitudes towards Poles, which are largely accepting according to the report. 55 percent of those polled said that people from Poland “work hard for a living” and 52 percent said they make a contribution to Britain (see right chart). 40 percent however said that Poles “Don’t make enough effort to integrate.”  Thus the report reveals the importance of separating anxieties from prejudices.

Read the report EU Migration from Romania and Bulgaria: What does the public think? here