Up to a million ethnic minority votes helped put David Cameron into Downing Street on election night, according to a major new piece of research showing  minority voters are increasingly up for grabs, writes Steve Ballinger.

While Labour remains ahead with ethnic minority voters on 52%, our research finds that the gap between the two main parties is shrinking dramatically. One third (33%) of ethnic minority voters supported the Conservatives in 2015, a stronger result than ever before for the party, which has historically struggled to appeal to non-white voters. The Liberal Democrats and Greens each took 5% of the ethnic minority vote, with just 2% voting for UKIP.

The new study – the largest survey of ethnic minority attitudes to be published in the 2015 election cycle – provides surprising new insights into the political views of ethnic minorities in Britain. Conducted by Survation for British Future, it surveyed over 2,000 ethnic minority respondents across Britain straight after the election from 8-14 May. 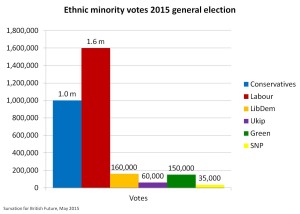 The results are especially encouraging for David Cameron’s Conservatives, showing that the party is closing the gap on Labour with ethnic minority voters, particularly British Asians and those in the South of England.

The gap between Labour and Conservative support was very small in the south and much larger in the north of England. One challenge for Labour may be that the party extended its vote share with ethnic minorities in its heartland seats where it already enjoyed large majorities, while in key seats like Watford, Swindon and Milton Keynes the Conservatives extended their appeal to aspirational ethnic minority voters.

Even such a comparatively large survey conducted straight after the election gives only a snapshot. Polling is under increased scrutiny at the moment and further research would be very welcome, particularly as this is only full-scale survey into 2015 ethnic minority voting behaviour yet published. The results do, however, echo trends identified in surveys before the election, showing Conservative advances and a decline in partisan support for Labour among ethnic minority voters.

An interim result from the British Election Survey, based on 762 ethnic minority responses from the March 2015 wave, showed Labour on 52% and the Conservatives on 24%, with 5-6% for each of the Lib Dems, Greens and UKIP, and 12% with other preferences.

Our findings suggest that the Conservatives may have made up further ground with minority voters during the campaign itself, as they appeared to do with voters more widely – particularly on the themes of leadership, the economy and the uncertainty of a Labour government dependent on SNP support.

A Labour party with a stronger appeal on these issues may be hopeful of winning these votes back in 2020, when ethnic minority voters will play a yet more significant role as they form a larger proportion of the electorate. The lesson for all political parties in that election will be that ethnic minority votes are more up for grabs than ever before.

"Useful summary from @CivilSocietyUK of civil society response to yesterday's 'Levelling up our communities' report… https://t.co/nBLVazTeJS"
"RT @steveballinger: Definite DIY feel to today's #BringBackHats Friday at @britishfuture. Chapeau to @lbuckerfield1 (box); @jake_puddle (cu…"
"RT @sundersays: A critical Public Accounts Committee report finds the Home Office has little idea about the impacts of an enforcement syste…"
"RT @jillyrutter: This is a terrible wrong on the scale of the Windrush scandal. Its ruined lives. Home Office assumptions about this group…"