On the anniversary of Britain’s first citizenship ceremony, writes Steve Ballinger, a new report says that Britain has ‘forgotten’ the value of citizenship and the importance of proactively promoting better integration – and calls on London to lead the way. 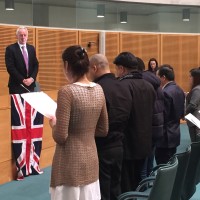 New Britons pledge allegiance to the Queen at a Brent citizenship ceremony, January 2016

London is a city of immigration and that brings pressures on people living here, as well as economic and cultural benefits that have helped make our city one of the greatest in the world. Making integration work – for people already here and for new arrivals too – is one of the keys to London’s continuing success.  So we need a London that we can all share. We need to promote more contact and understanding between Londoners from different backgrounds. And we need to build a sense of citizenship that reaches and matters to Londoners born and raised in Britain as much as to this country’s newest arrivals.

That’s why we’re calling on all London Mayoral candidates to back a new proposal for an Office for Citizenship and Integration at the GLA.

A new report setting out the proposals, from British Future in partnership with London Citizens, the largest and most diverse civic partnership in the Capital, and backed by voices across party politics, sets out why London needs to do more to promote integration and citizenship, and  some of the key priorities that the new Office could pursue. These include:

“Integration is a vital way to ensure that people who come to our great city make their fullest contribution to it – so that London benefits economically and socially, and we handle the pressures of immigration in a way that is fair to everybody.

“So I welcome this practical proposal about how the next Mayor could get the foundations of integration right – to make sure everybody shares a common language and can talk to their neighbours, and to do more to celebrate the pride which new citizens have in becoming British.

“It is an idea that should appeal across the political parties. London Conservatives are increasingly confident about our ability to appeal to Londoners across every colour and creed, and I hope Zac Goldsmith and his campaign will see the proposal as an attractive way for the next Mayor to make a positive contribution to bringing our diverse city together“.

“I fully support the establishment of the GLA’s Office for Citizenship and Integration, which is a vital development in turning rhetoric on the benefits of immigration into action that will benefit both immigrants and the city of London alike. As a country we don’t yet ‘do’ integration well enough and too many new arrivals consequently go on to live parallel lives in isolation, unable to make the most of the opportunities to thrive provided by our economy, culture and social fabric.

“We need to do much more and commit to a real concerted effort to enable new arrivals to fully integrate into our communities. The Office for Citizenship and Integration will be a valuable step forward in boosting integration by harnessing best practice and ensuring a joined-up approach across our city, which in turn can set the standard for improving how we encourage and promote integration across the country.”

To launch the proposal, Citizens UK are inviting a group of young Londoners to witness a citizenship ceremony in Brent, followed by a workshop to explore what citizenship means to them and what they feel a new Deputy Mayor could do to promote citizenship and integration. Keren Fadega, Blood, Sweat and Tears Leader for Citizens UK said:

“We need one London that’s fair for all of us – whether you’ve just arrived here or lived here all your life. And it’s important that we keep on getting to know people from different backgrounds, learning from each other and being proud of our diversity.  The politicians we elect to run London need to take responsibility for making that work, for everyone.”

This is something for all Londoners, of all backgrounds. Integration should not be seen as a challenge only for migrants and minority groups. The new Deputy Mayor should champion a vision, relevant to London and well beyond it, of integration as a shared challenge for us all:

This agenda can be pursued effectively at limited cost, with existing GLA resources supplemented by philanthropic partners in the city and charitable foundations. A new London citizenship fund could be created pulling private and public monies together, aiming to agree pledges that will total £1 million in private donations, with the expectation that they would be matched by the Mayor.

London is already an integration success story compared to most other world capitals. But with a dynamic individual driving forward a proactive plan, London could do so much more, becoming a beacon for more successful integration across the whole of Britain and helping to develop a stronger, shared sense of what integration means and how it can work in practice.

Mark Rimmer OBE, Head of Registration and Nationality for Brent and Barnet Councils – and the registrar who presided over the first citizenship ceremony on 26 February 2004 – said:

“I have been involved in conducting citizenship ceremonies since the very first one 12 years ago. I have seen first hand the passion, pride and emotion that participation in ceremonies generates and I feel privileged to have been a part of these life-defining events.

“The introduction of a welcoming event to celebrate the acquisition of British Citizenship was a great step forward but I do feel that we now lack a political champion to take the initiative to the next stage. It is important that our new citizens feel welcomed and valued by our politicians – to encourage belonging and integration and to celebrate those who wish to join us as part of the British family.”

“London is a beacon of integration in the modern world – but in a world that is changing as quickly as ours, effective integration won’t happen by accident. It has to be an active process – promoted, negotiated and supported in workplaces, schools and neighbourhoods.  That’s why an office isn’t just another bureaucratic invention – it’s a vital part of the city’s economic and social future.”

“London could be the place that all aspirational cities across the world want to emulate. Our global city attracts people from all over the world, who together, bring much to its economy and culture. It is important that we promote London’s strengths, including its amazing diversity. A dedicated Office for Citizenship and Integration would provide a focal point for these efforts, ensuring that Londoners benefit from the proactive inclusion of people who choose to make the capital their home and the United Kingdom their country.”

“BTB would welcome all mayoral candidates and the next mayor to put a greater emphasis on civic participation for all Londoners. Greater civic engagement and an emphasis on active citizenship will ensure community cohesion and empowerment across London.”