The appalling murder in Harlow of Arkadiusz Jozwik, a 40-year-old Polish man, in an apparently unprovoked attack, shocked people locally and across the UK. Race-hate stickers have appeared on lamp-posts in South Shields. In the extract below from our recent report ‘What next after Brexit? Immigration and integration in post-referendum Britain,’ Sunder Katwala discusses the spike in reported hate crime after the referendum and what methods might be effective in tackling it. 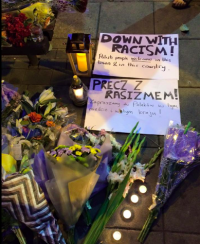 Vigil for Arkadiusz Jozwik, Stand Up To Racism Harlow

Challenging hate crime is surely something just about everybody can agree on. Yet the post-referendum debate exemplified how this can often be a surprisingly contentious area of policy, politics and public debate. Governments, politicians and civic groups are rightly keen to send out an “against hate” message, but devising approaches that go beyond symbolism to find effective ways to counter hate crime, and the attitudes that underpin it, can be more challenging.

There were 3,219 incidents of hate crime reported to police in the fortnight from June 16th to June 30th, a 37% rise on the previous year. Foul graffiti on the Polish centre in West London came to symbolise this deeply worrying spike in hate crime in the immediate aftermath of the referendum.

Yet the post-referendum debate risked breaking up a broad coalition for tackling prejudice and making this not a shared post-referendum project but a continuation of the referendum argument. Toby Young, a commentator who had advocated for Brexit, wrote about this dynamic, noting his own initial reluctance to accept evidence, before the graffiti on the West London Polish Centre convinced him of the need to act.

“These reports of racist incidents struck me as just one more example of the Remainers gleefully holding up “proof” that all their apocalyptic doom-mongering had come true … Given the increase in racist abuse since the referendum result, I think anyone who did back Leave, however hard we tried to make a positive, optimistic case for our departure from the EU, now has an obligation to condemn this behaviour … If the genie is out of the bottle, then it’s up to us to put it back in again.”

What Young’s account highlights is that there are responsibilities on both sides here. Remain advocates do a disservice to anti-prejudice campaigning if they posit that the core problem was the holding of a referendum and insist that all of those who campaigned for a Leave vote are complicit in acts of prejudice. If anti-prejudice campaigning is polarised along referendum lines it defines prejudice as a majority cause, instead of challenging those expressing prejudice as a toxic minority that has misunderstood the meaning of the referendum.

By the same token, those who voted Leave have a particular responsibility to marginalise and disown anybody who believes that the referendum was somehow a licence for hatred or xenophobia. The active campaign to protect EU nationals’ rights, which straddles both Leave and Remain support, has been one important way to delegitimise this minority.

What both sides share is a responsibility to depolarise the debate. That requires vigilance about all episodes, and a zero tolerance approach, while avoiding alarmism that could exaggerate the scale or persistence of the hate crime spike.

The government produced its new strategy, ‘Action Against Hate’ in late July. This proved effective as a vehicle for projecting a clear public message that hate crime would not be tolerated. The content of the action plan was mainly an overview of current initiatives, focusing on efforts to encourage victims to report incidents, with some incremental proposals to build on this around particular areas of concern.

Despite being published a month after the referendum, the government’s new hate crime action plan did not contain any specific analysis of hate crimes against European nationals, nor make recommendations to address it. There are currently no specific initiatives to encourage reporting, nor has there been a rigorous effort to establish the scale or frequency of harassment of European nationals. Anecdotally, some East Europeans suggest that they would be less likely to report incidents such as verbal harassment, sometimes being unaware that it would be investigated or, more troublingly, just feeling that it goes with the territory of coming to work in another country.

The post-referendum debate exemplifies one of the most important foundations for campaigning to uphold anti-prejudice norms in British society. We need these to be majority social norms, which successfully isolate and marginalise a toxic minority.

At one level, there is a broader political and social consensus today on taking hate crime seriously. It is only a generation ago that there was a mainstream debate about whether racist chanting at sporting events should be considered “banter”, and whether the only response to derogatory name-calling in the playground was to toughen up. There has been a significant shift in social norms in both cases. Yet this is not uncontested, as debate about the dangers of “political correctness” demonstrates.

The substantive issue here is not whether abusive terms like “Paki” or “pooftah” should now be readmitted to public discourse. Rather it is whether greater civility risks going too far and closing down legitimate and necessary democratic debates about difficult issues. This danger is a real one: it can lead to substantive harm, as when the authorities were far too slow to act on and effectively police sexual exploitation in Rotherham. It will also break up the majority coalitions that are needed to tackle prejudice effectively. One key to anti-prejudice messages having a broad majority appeal is to explicitly state that important debates – about, for example, immigration and integration – must remain open; before going on to draw a clear red line about the need to keep racism and prejudice out of those debates.

So the second key lesson is that consistency matters for anti-prejudice norms. Hate crime matters, whoever the victims or the perpetrators are. Those who are, rightly, concerned about prejudice against members of their own group should be expected to demonstrate an equitable concern for prejudice against other groups. A descent into ‘whataboutery’, when responses to examples of prejudice become primarily about whether there would be sufficient concern about a different victim, often fail this test.

There are good grounds for particular vigilance about anti-semitism and anti-Muslim prejudice in Britain at present, with evidence that both Jews and Muslims are increasingly anxious about this. There are different causes and dynamics, but an approach that recognises one set of concerns but dismisses the other as overblown is unconvincing – and throws away an important opportunity to broaden coalitions to tackle prejudice.

Thirdly, anti-prejudice activities need to respond to how social media has changed the context for prejudice and hate speech in British society today. It would not be unusual for somebody who has not experienced racial prejudice face-to-face for many years to encounter racial abuse much more frequently on social media today. This does not in itself provide evidence of more prejudiced attitudes. Pre-existing prejudices find easier expression when it now takes substantially less time and effort to abuse somebody with a public profile. Yet such online abuse risks eroding anti-prejudice norms and, more immediately, discouraging participation on equal terms in public conversations online if abusive, violent, racist and misogynistic language becomes commonplace and is not challenged.

So it will be important to talk more about what we can do collectively to promote and entrench civic social norms in these spaces. Beyond policing the boundaries when people do express hatred and advocate violence, there is potential for greater use of social media to promote positive messages too. To make a difference, this should put a particular emphasis on messages and approaches that can reach and engage more challenging audiences, not only those keenest to play their part in sharing such content. This will be particularly important if there is an increase in the frequency of terrorist attacks in Europe, which risk having a deeply corrosive effect on public attitudes.

The government strategy had least to say on the most challenging area of all: how to make an effective contribution to a sustained erosion of the attitudes that underpin hate crimes. This longer-term strategic challenge is also one of securing the foundations of decent debate. Policing the boundaries, calling out those who step over the line and bring prejudice and hatred into our public discourse, remains essential. But it is crucial that in doing so we do not shut down these conversations altogether, or segregate them into polarised, separate discussions between people who are already in agreement, with no room for dissenting but civil views.

A ‘National conversation on immigration’ would provide communities with a space in which to discuss and reach consensus on issues relating to immigration and integration. By agreeing what constitutes a decent debate and facilitating citizens being able to express their concerns in a civil way, it would help to counter hate crime and prejudice. We should, as a society, seek to marginalise those with hateful views of migrants and minorities: but that must not mean the closing-down of civil debates about sensitive issues like immigration and integration.

Download ‘What next after Brexit? Immigration and integration in post-referendum Britain‘ here