“Bradford needs more than just one cup final. It needs more winners. People are desperate; people want change.” These words, articulated by one member of the audience at British Future’s Beyond Wembley: What can bring Bradford together? event, struck a chord with many.

Bradford City might have lost to Swansea City at the weekend, but that has done little to dampen the feelings of pride that getting to the Wembley Cup final created, said the panellists. 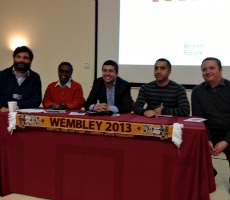 “Going down Wembley way was just amazing. So special,” said Jason McKeown, editor of The Width of a Post website and longtime Bradford City supporter, who was on the panel at the event.

But while recent football success should be celebrated, enthusiasm cannot just come from the game. “Looking at Bradford right now, we’ve got some fantastic things. We need to make sure that the positive way people are talking about Bradford right now stays,” commented Mary Dawson, a reporter for Bradford Community Broadcasting Radio.

Dawson was part of a lively crowd, with other attendees including bloggers from Hidden Bradford. Joining McKeown on the panel, which was chaired by British Future’s Sunder Katwala, was Anthony Clavane, chief sportswriter of the Sunday Mirror and authorl, Riz Rehman, operations director of the Zesh Rehman Foundation, a social inclusion project to bring communities together using football, and Maureen Grant, Development Officer for the Joseph Rowntree Charitable Trust in Bradford.

One positive thing to build on in the future is in fact Bradford’s past, said the panel. The city’s reputation has long been mired by the riots of 2001. Sadly this episode has concealed some happier images, ones that directly challenge sterotypes of Bradford. When it comes to football, Bradford City can be proud of Louis Bookman, who was the first Jewish footballer to play in the English top flight in 1911, Clavane highlighted. Clavane himself is an avid Leeds United supporter, but feels ashamed of Leeds’ record on racism in the 1970s and 1980s when they turned away Ces Podd, who went on to become a sporting legend for Bradford City. “Bradford City was much less racist at the time.”

“Me and my family were one of the only black families around, but there was never a sense of discomfort,” agreed Grant – a season ticket holder for Bradford City in the 1990s.

Grant found it strange though that her family, alongside Asian families, was an obvious minority. For a club situated in such a diverse area, why did Bradford City’s fan base fail to reflect this diversity?

Bradford City’s fans are much more diverse today. “When people look back to 2013, people will remember certain images. They will remember photos of young women not normally associated with football,” said Clavane in reference to images of a young female wearing a hijab at the Wembley game.

“Good will can only last for so long. People want to see success. Let’s make success,” commented one member of the audience.

“You can’t just have a football team and a rugby team and a city that’s falling apart in between,” added another attendee, as part of a discussion of what is needed in the city to help build a more positive future. The audience also discussed how the club could work more closely with schools, how the club could appeal to a wider range of supporters, and why Bradfordians might want to switch football allegiance from Manchester United to the Bradford team.

Watch our short video clip from the debate.