New research, showing that most people think community relations have got worse in the ten years since the 7/7 bombings, shows why it’s so important that we stand together on the tenth anniversary of that terrible day, writes Steve Ballinger.

The last decade has been an anxious one for Britain and it’s no great surprise that the new polling, by Survation for British Future, finds 54% of people feeling that community relations have got worse, not better, in the last ten years.

With 46% saying they have got better or stayed the same, it remains a ‘glass half empty’ response rather than one of panic. Underlying the anxiety is a calm resilience: people don’t want a fearful society that turns on itself. But they do think it’s important to face up to the challenges that we face. 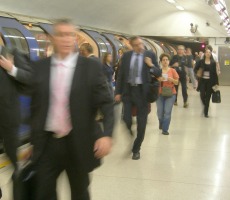 The 4000-strong poll included 2,000 ethnic minority respondents and almost 500 British Muslims. It finds a fairly similar overall view across different ethnic and faith groups: British Asians tend to see the glass as half-full, with 49% feeling things have got worse, and 51% that relations are similar or better. Muslim respondents remain more pessimistic than those from other minority groups, with 56% saying community relations have got worse – about the same response as the majority population across Britain.

The research also suggests there is potential to develop common ground. Most of Britain (56%) agrees that British Muslims are opposed to the terrorist ideology behind the 7/7 bombings. But with three in ten (31%) saying they neither agree nor disagree, it remains clear that much more work is needed to build trust between communities in Britain.

Stories on the news about British kids going off to fight for ISIS in Syria remind us that there’s still a lot more work to be done at home. Most Muslims are clear that they want to be part of the solution, not part of the problem and we need to work together to make sure those unifying voices get heard by those who are most anxious.

The survey finds most people agree that the British public does not hold ordinary British Muslims responsible for the terrorists behind the 7/7 bombings. But it is by a slim majority, with 51% in agreement, 22% disagreeing and 27% on the fence. British Muslims themselves, however, are less confident that people don’t hold them responsible: only 40% agree, with more than a third (36%) disagreeing.

The poll is released as people of different faiths and backgrounds are coming together for #WalkTogether, a new initiative calling on people to unite in remembrance of those who lost their lives in the 7/7 bombings. Organisations backing it include Faiths Forum for London, Hope Not Hate, the Islamic Society of Britain, City Sikhs, JW3 Jewish Community Centre London and the Hindu Council UK.

It calls on people in London and all over Britain to get off the bus, train or tube one stop early on 7 July 2015 and walk the last stop, in a quiet moment of remembrance and unity, showing their support with the #WalkTogether hashtag. It is inspired by the scenes on London’s streets on 7 July 2005, when public transport closed down and thousands calmly walked home.

The tenth anniversary of 7/7 is an important moment for Britain, with the horrific killings in Tunisia a terrible reminder that the threat of terrorism has not diminished.

We remain anxious about our shared society. Some are asking British Muslims ‘Do you really want to be one of us?’ while some Muslims, looking at the polarising headlines, are asking ‘are you really going to let us?’

The answer to both should be an emphatic yes – but for that to be the case we need the calm and constructive voices of the decent majority to be heard in our national conversation about the challenges we face. The most extreme voices will use shock and terror to grab the headlines – but the rest of us have the advantage of speaking for what most of Britain wants.

The #WalkTogether initiative is a symbolic gesture. It is first and foremost a public mark of respect and remembrance of those who lost their lives on that terrible day 10 years ago. But is also an important way to show the shared commitment of people from different backgrounds to work together to create the society we want to share. That is needed now more than ever.