British Future is the secretariat for the All Party Parliamentary Group (APPG) on Social Integration. Find out more on the latest work of the APPG below.

Breaking down barriers to integration

The All Party Parliamentary Group (APPG) on Social Integration is a cross-party group of Parliamentarians which aims to drive forward a conversation on policy solutions that break down barriers to integration and create opportunities for people from all walks of life to connect with each other and build bonds of trust.

Social Connection in the COVID-19 Crisis 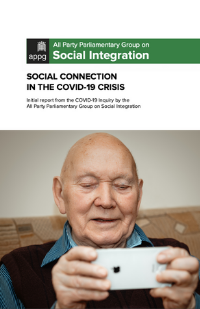 Click here to read our latest report on social connection in the COVID-19 crisis.

The report shares the findings from Part One of our inquiry, which gathered evidence from businesses, charities and public sector organisations working in social connection to establish the challenges which they are facing under the COVID-19 crisis and their examples of best practice.

To launch this report, British Future hosted an online webinar to share the findings from Part One of the inquiry and cast forward to he future challenges for businesses, charities and public sector organisations that work with isolated groups.

ICYMI: Follow this link to view a recording of the webinar.

Slides from the presentation of the Inquiry findings can be found here. 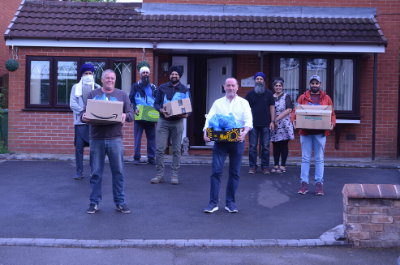 The COVID-19 crisis has already seen many examples of civic contribution and local solidarity. It has also shone a light on the challenges of social isolation. People are being asked to socially distance, which is important for public health, but at the same time we need to avoid social isolation. Concern has been expressed about older people, those in sparsely populated rural areas, homeless people and some minority ethnic and migrant groups, who may be vulnerable due to such isolation. Public health information may not reach them, and they may not have friends and family who can support them in situations of self-isolation or wider societal ‘lock down’. Long-term isolation may exacerbate loneliness and damage wellbeing and mental health.

Despite these concerns, there is a growing number of initiatives that are already reaching out to these groups. In the current situation it is important that we share good practice in reaching out to socially isolated groups. Consequently, The Social Integration All Party Parliamentary Group has decided to run a short inquiry that focuses on what we can learn from the COVID-19 crisis about social connection with isolated groups.

The Inquiry has two parts. Part One involved a written and oral call for evidence, gathering information from organisations and individuals who work with isolated groups to learn from the issues that they are facing, their advice for best practice in response to COVID-19, and their recommendations on how the Government can reach and support socially isolated groups. The oral evidence sessions can be found below. You can also read our report summarising and assessing the findings of Part One here.

Next, Part Two of the Inquiry will take place when the situation begins to return to normal, focusing on the lessons learned from this crisis.

The APPG on Social Integration has been holding informal online oral evidence sessions to examine the issues which COVID-19 has created for socially isolated groups and the best practice for responding to these challenges. Watch all three sessions below.

The APPG on Social Integration held its Annual General Meeting on Tuesday 3rd March. You can view the minutes from the meeting here. Registration forms were submitted following this meeting.

Please keep an eye on this website and the official Twitter Page @IntegrationAPPG for the latest updates. For any questions of queries, please contact British Future at info@britishfuture.org  who now form the APPG’s secretariat, after the previous secretariat, The Challenge went into administration.

Social Connection in the COVID-19 Crisis

Interim report of the All Party Parliamentary Group on Social Integration’s Inquiry into social connection during the COVID-19 crisis.

From the previous Parliament:

Interim Report into the Integration of Immigrants

Interim report of the All Party Parliamentary Group on Social Integration’s Inquiry into the integration of immigrants.

Essay collection for the All Party Parliamentary Group on Social Integration’s Inquiry into intergenerational connection.

Holly Lynch is the Labour MP for Halifax – first elected in 2015. She is a member of the Home Affairs Committee.

Saqib Bhatti is the newly elected Conservative MP for Meriden. He is the youngest ever President of the Greater Birmingham Chambers of Commerce.

Sir Peter Bottomley is the Conservative MP for Worthing West. He is the Father of the House of Commons.

Fleur Anderson is the newly elected Labour MP for Putney. Before entering Parliament, Fleur was the Head of Community Services for the Katherine Low Settlement, a community centre in Battersea.

Virendra Sharma is the Labour MP for Ealing Southall – first elected in 2007. He is a member of the International Development Committee.

Jim McMahon is the Labour MP for Oldham West and Royton – first elected in 2015. He is Shadow Minister for Housing, Communities and Local Government.

Dr Rupa Huq is the Labour MP for Ealing Central and Acton – first elected in 2015. She is a member of the Committee on the Future Relationship with the European Union.

Anne McLaughlin is the Scottish National Party MP for Glasgow North East – first elected in 2015. She is the Shadow SNP spokesperson for Women and Equalities.

He is a member of the Home Affairs Committee and the SNP Spokesperson for Immigration, Asylum and Border Control.

Robbie Moore is the newly elected Conservative MP for Keighley. He is a member of the Environment, Food and Rural Affairs Committee.

Naz Shah is the Labour MP for Bradford West – first elected in 2015. She is the Shadow Minister for Women and Equalities.

Kate Green is the Labour MP for Stretford and Urmston – first elected in 2010. She is a member of the Committee on Standards and Privileges as well as the Speaker Committee for the Independent Parliamentary Standards Authority.

Peter Gibson is the Conservative MP for Darlington – first elected in 2019. He is a member of the Women and Equalities Select Committee.

Seema Malhotra is the Labour MP for Feltham and Heston – first elected in 2011. She is a member of the Committee on the Future Relationship with the European Union.

Gavin Robinson is the Democratic Unionist MP Belfast East – first elected in 2015. He is the Shadow DUP Spokesperson for Home Affairs and Defence and is a member of the Defence Committee.

Rushanara Ali is the Labour MP for Bethnal Green and Bow – first elected in 2010. She is a member of the Treasury Committee.

Debbie Abrahams is a Labour MP for Oldham East and Saddleworth – first elected in a 2011 by-election. She is a member of the Work and Pensions Select Committee.

The Secretariat to the APPG on Social Integration is provided by British Future.

British Future is an independent, non-partisan thinktank seeking to involve people in an open conversation, which addresses people’s hopes and fears about identity and integration, migration and opportunity, so that we feel confident about Britain’s Future.

Society can often feel divided and its citizens can often feel isolated. That is why we work to promote integration, identifying workable solutions to make Britain a country that people from all backgrounds want to live in and share.

We hope that this APPG will help to do this by engaging parliamentarians across political divides to drive forward a cross-party conversation on policy solutions that break down barriers to integration and create opportunities for people from all walks of life to connect with each other and build bonds of trust.

Or email us at integrationappg@britishfuture.org

To stay up to date on the latest events and publications of the APPG, you can register for our mailing list here.

To get in touch about media opportunities and for comment.