Everyone in England should be able to come together to celebrate our shared identity.

People worry about Englishness being divisive but we believe that everyone in England, whatever their faith or ethnic background, can join the party and show their pride in the country where we live.

Big sports events are one of the few opportunities that we have to do that.

When Roy Hodgson’s England side head off to the Euro 2016 football tournament in France in June this year, it’s a chance to show that this is a modern, inclusive England, open and welcoming to all.

It’s a chance to show that #WeAreAllEngland.

#WeAreAllEngland is a new initiative for everyone who feels a sense of belonging to this country.

Whether you’re a football fan or only tune in for the big England games.

Whether you’re Scouse or Geordie, from Yorkshire or Cornwall, Arsenal or Tottenham; Labour or Tory, LibDem or UKIP; whether you’re black, white or Asian; Christian or Jewish, Hindu, Sikh or Muslim.

It’s for people who already proclaim their Englishness and for those who feel uncertain whether it’s OK to celebrate it.

We want to show that England is at its best when we all feel that we can belong to it.

You don’t have to be a massive football fan to join in – we can all show some pride in our team and our nation.

This summer, let’s show that #WeAreAllEngland.

And if you don’t have an England flag to wave, download one to print out here or by using this link and use it for a selfie – as modelled below by Steve and Avaes from British Future: 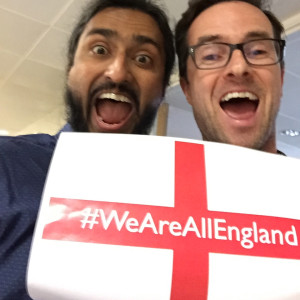