What next after Brexit? Immigration and integration in post-referendum Britain 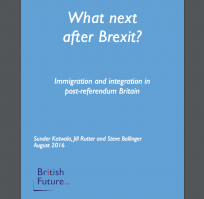 Britain’s decision to leave the European Union will have a significant impact on our approach to immigration. The kind of Brexit we get will have a decisive influence on what any new immigration policy will look like. But as well as bringing challenges, the Brexit shake-up could be an opportunity to get immigration policy right – to restore trust in a system that works, and public consent for the immigration that we have.

What next after Brexit? Immigration and integration in post-referendum Britain looks at the challenges and opportunities for both Government and those involved in the immigration debate following the inevitable shake-up to immigration policy that Brexit will bring.

Drawing on new opinion polling from ICM conducted after the referendum, the report features research, analysis and recommendations to both national and local government, as well as to pro-migration advocates.

It asks the public what they think about different types of immigration and  finds that most people have balanced, moderate views – a preference for cuts to some flows of immigration and increases in others – while remaining mistrustful of the governments’ competence to manage immigration effectively.

The 60-page report includes chapters on: