Does ethnicity matter? Does being born somewhere make a difference to being regarded as “from” England, Scotland or Wales? 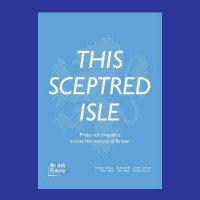 Also read articles on English anxiety, Scottish civic identity, Welsh feelings about its flag, England’s attachment to countryside as a source of pride, as well as an argument for a mild change in St George’s Day, and reports on attitudes to an English anthem.

Read Andrew Mycock’s commentary based on the report: ‘How civic is the ‘new Scottishness’‘.