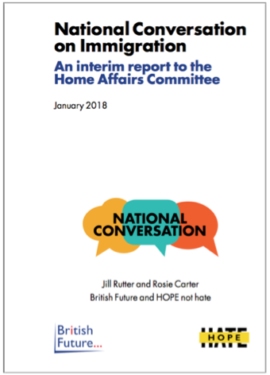 The interim report of the National Conversation on Immigration draws on the first 30 locations visited in the biggest-ever public consultation on immigration.

It asks citizens what they think about different flows of migration, its impacts and benefits nationally and in their local area, and what approach Britain should take to immigration after it leaves the European Union. It examines common themes as well as local differences.

The report is published as Parliament’s Home Affairs Committee publishes the report of its own inquiry on immigration, to which the National Conversation reports are submitted as evidence.

Coordinated by British Future and Hope not Hate, by the time it concludes later in 2018 the National Conversation will have held over 130 meetings, in every nation and region of the UK, with members of the public and local stakeholders concerned with immigration.

Interim findings from conversations to date include: 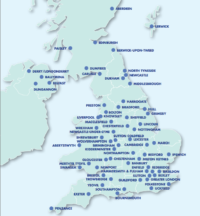 The National Conversation provides an opportunity for members of the public to have their say on immigration policy after Brexit in a way that will be heard by decision-makers.  This model of public engagement with important policy decisions is one that could be taken up by government on an ongoing basis and replicated across a range of issues.

As well as the citizens’ panel, in each location the National Conversation researchers meet local organisations, councillors and business leaders to hear their views. National opinion polling will take place in 2018 and an open online survey allows everyone in the UK to have their say in the National Conversation. A final report will be published later in 2018, incorporating the poll findings and survey results together with further local reports and national recommendations.

Members of the public can have their say in the National Conversation by completing the online survey at www.nationalconversation.org.uk