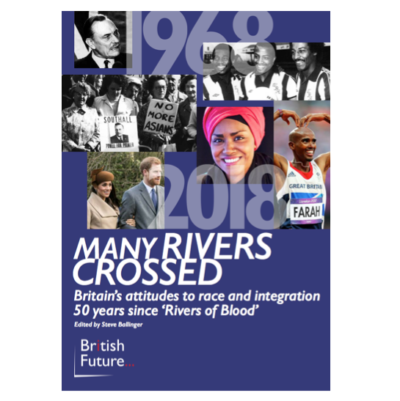 Fifty years on from Enoch Powell’s ‘Rivers of Blood’ speech, Britain has largely moved on from the divisive opinions Powell voiced on race, according to new national research on public attitudes – though a prejudiced minority still remains.

Half a century on the passions stirred up by Rivers of Blood may have faded, but the anniversary is a key moment in Britain’s story about race relations, immigration and integration. Many Rivers Crossed: Britain’s attitudes to race and integration 50 years since ‘Rivers of blood combines the local story of how people in Wolverhampton and the West Midlands today think about the changes of those 50 years along with ‘state of the nation’ findings about changing attitudes across the UK.

In the report commentators and politicians including Sajid Javid and Vince Cable, Sara Khan and Ian Austin, set out what they would say to Powell today if he were still alive. We also visit the diverse local primary school that Powell’s speech cast into the spotlight in 1968 and hear the personal stories of people in the area.