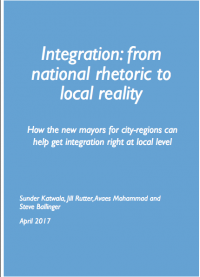 The election of mayors for six new city-regions across England – in Greater Manchester, West Midlands, Liverpool City Region, Tees Valley, Cambridge & Peterborough and the West of England – is a major opportunity to address the vacuum at the top of politics on integration.

The new mayors are ideally placed to develop integration strategies that tackle these challenges and  secure support from citizens across the new city-regions.

Integration: From national rhetoric to local reality, a new report from British Future, sets out the different integration challenges that each new mayor will face in their region, with recommendations for action.

The report calls for the appointment of new deputy mayors for integration, leading an Office for Citizenship and Integration in each of the new combined local authorities. Similar offices have been successfully set up in cities like New York, Barcelona, Hamburg and, most recently, in London.

"Can new leader Keir Starmer help Labour build the bridges it needs? asks @sundersays https://t.co/t4NLUI59XQ https://t.co/LBd10m2xTr"
"RT @sundersays: There are many policy challenges from this crisis - some v.immediate, some medium and longer-term. Digital capability, acce…"
"RT @HollyLynch5: Please do feed into the @IntegrationAPPG call for examples about how you are reaching out to socially isolated groups duri…"
"Lord Ashcroft and @DailyMirror join forces to call for special #COVID19Pandemic medal for those at forefront of bat… https://t.co/vOqN3i0XwG"