The Olympic generation, aged 18-24, 83% think it will be harder for today’s teenagers to buy a home than it was for their parents, and 58% think it will be much harder, according to a new British Future report.

Around 88% of graduates believe it will be harder to buy a home, compared to 85% of those with A-levels or lower. The concern is almost as strong among the privately educated (82%) as those who went to a state comprehensive (88%). 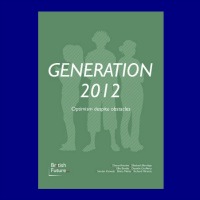 But surprisingly 67% are optimistic about their own future and 33% are pessimistic, overall. Indeed, optimists outnumber pessimists among every group. Graduates and non-graduates, among those work, who are studying those who are unemployed, though it is stronger among the better educated and more affluent.

British Future has worked with YouGov to conduct a rare poll on the 18-24 group, to find out more about how these young people feel and what they see as their biggest challenges in this challenging economic climate.

Generation 2012 speaks with an age group who have been dubbed by some the “lost generation” but turn out to be more optimistic than their parents, despite the bumpiness of the recession.