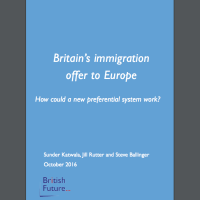 Britain’s immigration offer to Europe: How could a new preferential system work? sets out a new proposal for a preferential system for EU immigration to the UK. Such a system could, we argue, secure UK public support and work for British business; yet it is also politically deliverable in Westminster and for the EU and its member states too.

The trade-off between accessing European markets and managing EU immigration lies at the heart of the current Brexit policy debate. Various voices from both sides of the negotiating table have set out their red lines. But we have heard relatively few constructive proposals for a deal that might square this circle and work both in the UK and in the capitals of Europe.

The report details a new, three-tier immigration system which offers preferential access to EU workers, with free movement maintained for workers that pass a skills or salary threshold; but brings unskilled immigration under UK control, through annually set quotas. Importantly, the first opportunity to fill those low-skilled migrant quotas would go to Britain’s preferential trade partners, such as the EU.

Many think immigration presents an impossible conundrum for the Brexit negotiations.  A new, preferential system, we argue, could rebuild trust on immigration in Britain while offering UK negotiators a positive offer to make as it seeks a strong trade deal with the EU.