The leader of the English Defence League (EDL), Tommy Robinson, has announced that he is leaving the organisation, as is EDL co-founder Kevin Carroll. In a statement released by counter-extremism thinktank the Quilliam Foundation, Robinson, 30, says: 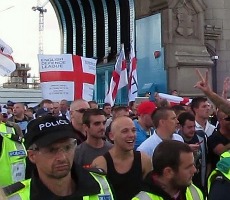 “I have been considering this move for a long time because I recognise that, though street demonstrations have brought us to this point, they are no longer productive. I acknowledge the dangers of far-right extremism and the ongoing need to counter Islamist ideology not with violence but with better, democratic ideas.”

In response to their resignations, British Future director Sunder Katwala says the following:

“The EDL has failed, as all far-right groups have failed in Britain, because we don’t ‘do’ that kind of extremism here. People in this country are proud of defeating fascism in the second world war and don’t want to support another version of it.

“I welcome Tommy Robinson’s acknowledgement that the violence and hatred stirred up by the EDL could not be controlled. I hope The Quilliam Foundation succeeds in engaging Robinson and Carroll with the mainstream, mirroring its own director Maajid Nawaz’s  journey from extremism. It can only be good when extremists make that journey, whether from the far right or from militant Islamism.

“There are difficult conversations to be had about immigration and integration in this country. We should have them in a way that promotes understanding and solutions. I hope Tommy Robinson completes his journey to democracy and joins this conversation rather than shouting from the sidelines.”