The small and beautiful city of Bangor, set in the idyllic landscape of north Wales is a hub for students and tourist from across the country. This idyllic appearance, while true in the most part, isn’t a view completely shared by the inhabitants of this amazing place. For the youth of the area and the local population there are many issues lying beneath the wondrous setting, writes Bryn Llywelyn Lewis, who lives in a small town between Llandudno and Bangor, north Wales, and volunteers with the Bangor Youth Group. 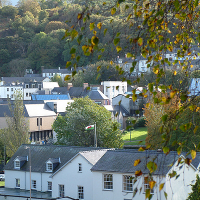 As a young person having grown up in this area I feel amazingly privileged to be part of the landscape and history of this place, but a lack of facilities within the community, and a lack of opportunities as I begin to grow older, has marred this image. Unfortunately, its not only me that feels this way. Over the years the local community have struggled hard to try and improve their situation, but with constant setbacks and broken promises this feeling of self-improvement has become a grudging feeling of being below the main priorities of the city.

Walking down the high street the first impression most people now have is of a once thriving community laid low: empty shops line the high street, building sites sit half finished or not begun, and most of the money flowing through the city comes from out of town. But myself and a few of my friends have recently started becoming involved in new and exiting projects in the area. After a course in entrepreneurship with The Prince’s Trust we are now key volunteer members of the Bangor Youth Group (BYG’s) – a group currently dedicated to creating nights for young people aged 12-16 in various venues around the city centre, but hopefully moving towards acquiring a permanent venue where the youth can organise and hold their own events.

After only a few months we’ve seen a massive rise in support from other local groups in the community, and are attracting widespread attention nationwide. Currently the most exiting project that BYG’s is part of is a joint performance debate, the SuperAssembly, with National Theatre Wales. Within this performance we hope to highlight not only some of the major issues for young people, but also how we can work as part of the larger community to work towards combined goals to better our city for all of its inhabitants. This kind of major support is a massive boon for a small group and community like ours, and shows that anybody can make a difference in their own life and area if they strive to achieve this change. In Bangor it may have taken a long time, and many generations of work, but the spirit of improvement may still live on.

Bryn Llywelyn Lewis, 23,  lives in a small town between Llandudno and Bangor on the North Wales coast called Penmaenmawr. He has spent most of his life in the area and currently volunteers with the Bangor Youth Group.