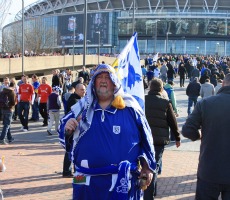 Football in the Welsh capital has always come second fiddle to the much-loved national rugby team, and with Cardiff City’s glory days being in the 1920s, it’s no surprise. But the pride the Welsh show for rugby exhibits itself in the football stand as well. The rise of Cardiff City to the Premiership will boost pride in the Welsh sporting legacy further, argues Dan J Lloyd.

Amidst all the commotion Russell was knocked off his feet, Alex saw his watch fly off his wrist as he was grabbed from every angle and thrown up into the air, and another had an elbow smack him hard on the back of the head. Fighting through the crowd to get air or just some space to breathe was almost impossible, but finally we reached the concourse, and safety.

This was the home tie of Cardiff City versus Bristol City in the Division Two playoff semi-final at Ninian Park. My friends and I were in the Grange End stand of the stadium, a once infamous terrace in football and home to the most loyal Cardiff City fans. The aforementioned bedlam, or rapture, followed a Cardiff City goal, one that would set up the Bluebirds for a playoff final, and then eventual promotion to the Championship. That was 10 years ago.

Karl Marx said religion is the opium of the people. For the Welshman, it’s sport. With rugby it’s self-evident, but even in the lowly leagues of football euphoria gripped spectators at Cardiff games.

Over the past decade things have changed for the club. A new all-seater stadium, new owners, new team colours and a new league mean the Cardiff City of 2003 is almost unrecognisable now. This transition has taken a long time and seen many hurdles, from narrowly missing out on promotion to the Premiership on more than one occasion, and making it to an FA Cup final, only to lose.

Cardiff fans were left in limbo and their only weekly social outlet was met with mixed emotions. The success of their fierce rivals, Swansea City FC, only made it harder. Proving their worth in the Premier League and winning the League Cup was a constant reminder of the underachievement of Wales’ capital football team. But it turns out that 2013 is finally Cardiff’s year, as the team have been promoted to the highest tier of English football where they will join their Welsh foes.

Many will believe that promotion came at a heavy price. At the request of the Malaysian directors, Tan Sri Vincent Tan and Dato Chan Tien Ghee, or TG as they’re known, the kit changed from blue shirts and white shorts to red shirts and black shorts. Even the famous bluebird on the crest made way for a dragon, “a symbolic fusion with Asia which will allow us to fly the Welsh flag on behalf of Cardiff wherever we go,” TG says.

It was a controversial move for the team, one which is still opposed by many fans. But by doing so it has provided a much-needed cash injection for the club, one which will fund their fight to stay in the Premiership next year, along with new training facilities to help build a foundation for the future. This is essential for not only Cardiff City, but for nurturing young Welsh footballers who may turn the fortunes of a woeful Wales national football team.

It’s won’t be the first time Cardiff has welcomed Premiership football teams to its city. During Wembley’s construction of the Millennium Stadium, Wales’ national ground hosted the FA and League Cups, as well as the Community Shield.

When a major sporting event is held in Wales the locals come out in droves and these football games are no exception. Cardiff turns into a carnival for every game, an escape for the working classes. English friends of mine have commented on how much they enjoy Cardiff when watching their teams. They mention the atmosphere, the welcoming nature of the people and of course the pubs. Cardiff City’s fortunes basically become emblematic of Wales’ fortunes.

In 2007, after Wembley finished construction, the terraces of the Millennium Stadium fell silent once more. Now football has come home to Cardiff. While they have a snazzy new stadium, a huge bank balance and a dragon on their badge, one thing remains the same as that frantic football game in 2003 – the fans. The passion of Cardiff followers is unrivalled, a passion I experienced first-hand and one which will be to the detriment of visiting teams. One thing’s for sure, the Premiership will be a much louder place next season with Cardiff in it, and I for one can’t wait.

Dan J Lloyd is a journalist and grew up in Wales.