Rest of UK can learn from Northern Ireland WW1 commemoration

It is uncommon to see Northern Ireland as a model for public policy in the rest of the UK. Sectarian politics render it an unlikely point of comparison let alone a source of solutions. However, as we enter the period of 1914-18 centenaries, Northern Ireland does offer some pointers as to how to tackle some of the more difficult issues the rest of the UK will face, such as the nature of the war and how it should be commemorated. That is because people there, together with people in the Republic of Ireland, have been addressing their own complicated relationship with the first world war for some time, as long as two decades in some cases, writes Richard Grayson. 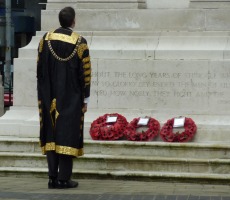 Lord Mayor of Belfast Alderman Gavin Robinson lays a wreath at the Cenotaph at Belfast City Hall to mark the 96th anniversary of the Battle of the Somme, 2012. Photo: DUP Photos

Prior to the early 1990s it was common for people on the island of Ireland to take one of two views of the war. For unionists in the north, the war, and especially the first day of the Battle of the Somme, was commemorated as a defining moment in Northern Ireland’s history. Before the state had been formed, the actions of the 36th (Ulster) Division on 1st July 1916 were seen as a blood sacrifice for King and Country. For nationalists of all shades of opinion, the war was largely forgotten. Different heroes, those of the Easter Rising, had emerged for them from 1916, and even if nationalists did carry out any form of remembrance, it was, as Sinn Féin’s Tom Hartley has said, “underground”.

However, in parallel with the Northern Ireland peace process, and often as a contribution to it, there has been a massive change across Ireland as many who had nothing to do with remembrance steadily embraced it. That began with individuals, often historians and journalists, but soon drew in the Dublin government, the Social Democratic and Labour Party, and steadily, Sinn Féin. It led to the Queen’s groundbreaking acts of commemoration in Dublin in 2011. Most recently, a Sinn Féin Lord Mayor of Belfast, Máirtín Ó Muilleoir, took a formal role in a Royal British Legion Armistice Day event. Such steps have made a significant contribution to better community relations in Northern Ireland. At a time when issues such as flags are so controversial in Ulster politics, the significance of engagement by republicans in territory which has generally been seen as unionist is not to be underestimated. How has this happened? And why and how should the rest of the UK learn from this?

In Northern Ireland, specific thinking about 1914-18 commemorations began much earlier than in the rest of the UK because it is part of a wider ‘Decade of Centenaries’. That began in 1912 with events such as the sinking of the Titanic and the signature of the Ulster Covenant, and it will not finish until 2023, with the centenary of the end of the Irish Civil War. The Community Relations Council website alone shows how much work has already been done, as do projects such as Castleton Lanterns.

Fundamentally, changes have taken place in Northern Ireland and more widely because people have bothered to engage with the history, rather than just the myths, and they have carried out their own research.  An important example of this is the 6th Connaught Rangers Research Project. The 6th Connaughts were a battalion which recruited heavily in West Belfast among nationalists. Such men joined because their political leaders asked them to: John Redmond, the leader of the Irish Parliamentary Party, believed that one way to secure Home Rule from the British was to support the British war effort, rather than taking an alternative nationalist view that England’s danger was Ireland’s opportunity. Yet in the crucible of Ireland’s post-war fight for independence the men of the 6th Connaughts were almost entirely forgotten. If they were remembered, they tended to be seen as traitors by republicans who could not understand how any of their forebears could have fought in the British army.

Since 2006, the 6th Connaught Rangers Research Project has researched the story of the battalion and its men. Drawing on the time, curiosity and passion of people from a wider range of nationalist backgrounds, including former Official Republican internees/prisoners, it has uncovered a wealth of material which has helped to reshape nationalist views of how and why men fought in the British army in 1914-18. In particular, it has helped local people to understand something of the nature of pre-1916 Irish politics, a time when there were very few overt republicans, and when the nationalist MP for West Belfast, Joe Devlin, could say to nationalists that by enlisting they could “claim a full and an increasing share in the work and the glory of the Empire, which the blood and brains of Irishmen have done so much to create.”

The story of the 6th Connaught Rangers is not the whole story of West Belfast nationalists, nor did it intend to be. My own research has shown how many nationalists from the area served in regular battalions of the British army well before volunteer units reached the front. But it does illustrate what specific local studies, carried out by people in their spare time, can achieve in two particular ways.

First, some of those involved in the project became interested because of a family connection. Had the project not existed, they might well have carried out research on their ancestor, but it would have been isolated from any wider context of debate and discussion about service. So this kind of co-production has benefits for individuals’ own family research.

Second, carrying out specific research on individuals in large numbers is the best way to tackle ‘myths’. This might sound obvious but so often histories of the war focus on the dramatic and the remarkable, forgetting that it was not the lucky few who returned but (across the British army) 88% of those who served. Only by examining a broad range of experiences among those who did not end up on a war memorial can we fully understand the nature of the war as experienced by the average soldier. That can then be exceptionally challenging to previously widely held ‘understandings’ of the war, whether it be experiences at the front or (in a highly charged political environment) reasons for enlisting.

‘Myths’ about the war have been as powerful in Ireland as anywhere else, often in the face of objections from historians. Yet there will be little that historians can do to challenge such myths unless the public engages with such grassroots historical research. Experience from Northern Ireland suggests not only that it is possible, but that it can have a significant effect on public understanding of the war in all its complications.

Richard Grayson is a professor of history at Goldsmiths, University of London, and author of Belfast Boys: How Unionists and Nationalists Fought and Died together in the First World War. Watch Grayson talk about how commemoration can bring people together in Northern Ireland below: