The dilemma of condemnation: When is too much not enough?

A scan across social media, blogs and opinions among Muslims following a public incident like Woolwich yields similar shameful confessions about their first thoughts: “I hope it’s not a Muslim.” It’s the expression of a deep fear that rises up from the belly, a shrill internal voice that remembers the backlash against Muslims over September 11th, July 7th and every other incident meticulously reported in the press that highlights Muslims as violent and “other”, writes Shelina Janmohamed. 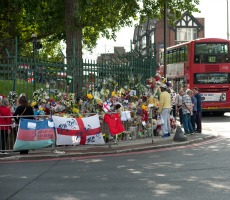 It’s no surprise that Muslims’ first instinct is to hope that the perpetrator isn’t Muslim: after all, our society is conditioned to believe that it’s Muslims that are the problem.

There’s a palpable sense among Muslims that coverage of terrorism is selective: Muslim perpetrators are disproportionately highlighted. First reportage usually talks of Islamic protagonists, and even when this is subsequently found not to be the case, corrections are rarely made, leaving a dark question mark hanging over Muslims.

In the FBI’s most recent data (1996-2005) only 6% of terrorist acts were deemed “Islamic terrorism.” More recent data from Europol about the EU shows that from 2006 to 2011 only 24% of terrorism-related arrests and detentions were “Islamic”. Out of 2,313 terrorist incidents, only 55 Muslims were found to be directly related to terrorist attacks during that period. According to the EU Terrorism Situation and Trends report, in 2011 “not one religiously inspired terrorist attack on EU territory was reported.” Last year, out of 219 attacks on EU territory, only six were “religiously inspired.”

So the question remains for Muslims: to condemn or not to condemn? In the immediate aftermath of Woolwich this question raged. Those who condemned were themselves the recipients of condemnation, accused of selling out. To say that the attack was “not in our name” was to implicitly suggest that there was a problem with Islam. To condemn was to claim guilt by association. If Muslims are not collectively guilty, there was no need to denounce the perpetrators. After all, ethnically white Britons weren’t busy condemning the murder of Mohammed Saleem, a 75-year-old man on his way back from prayers at the mosque. To reject guilt was to create an association of guilt. From this perspective Muslims were offering far too much and unnecessary condemnation.

On the other hand, condemnation is a manifestation of the basic and fundamental abhorrence of violence against innocents that Islam advocates. As Muslims, said these voices, we condemn such atrocities, and we do so as members of British society. It is the fact that we are Muslim but also that we are British that makes us extend the hand of unity across the divides to reject all forms of extremism. Further, Muslim organisations saw it as a duty of care to Muslims to ensure clear condemnation was heard in British society to prevent a backlash. A condemnation would also act as a reassurance to those who were not Muslim that malicious whispers about supposed Muslim violence were not true.

After Woolwich, Muslim public condemnation was quick and unequivocal. Politicians were heartened by this and praised Muslim community responses. And yet – just like in previous instances – there were still cries as to why the “moderate” Muslim voice was not more vocal. The complaint was that there was not enough condemnation from Muslims.

We must pan out now and see this in the frame of a broader range of contributory issues. For example, British foreign policy remains – according to security experts – a key factor in violent extremism. While Muslim condemnation of Muslim perpetrators is welcomed, demanded even, criticism of wider British policies is described as Muslims being mealy-mouthed. Muslims are being asked to “own the problem,” while being told all other issues are off the table. Muslim opinion is rejected as being out of place in engaging in legitimate political discourse and opposition.

We see the same pattern with the recent horrific cases of grooming and child sex abuse. It is depicted as a “Muslim problem,” despite Muslims being a tiny segment of a disgusting tranche of criminals. It is demanded from Muslims that they condemn the actions, which as right-thinking human beings they do of course. They are asked to condemn it as a Muslim problem, but when Muslims clearly condemn the activities – as right thinking human beings do –  they garner criticism as claiming guilt by association.

All of this boils down to the fact that for Muslims it’s a catch-22: condemn and be associated with guilt; do not condemn and be seen as a violent sympathiser, a fifth column. Either way, it can feel as though our words fall on deaf ears. Yet we remain positive that we must be a pro-active part of the conversation in tackling extremism.

Shelina Janmohamed is a news columnist and the author of Love in a Headscarf. Follow her blog at www.spirit21.co.uk or @LoveinHeadscarf