While the whole world flocked to London to witness the buzz of the Olympic summer 2012, north-east England felt somewhat excluded and not just in terms of geography. Our region received the lowest percentage of sold tickets for Olympic events and for many the few football matches hosted at St James’ Park and the five-second appearance of Whitley Bay’s Rendezvous Café in the BP torch advert was the only palpable excitement felt. However, this is not to say that our region was completely neglected, and an Olympic legacy lives on, even if not as pronounced as hoped, writes Next Generation blogger Matilda Neill from Whitley Bay. 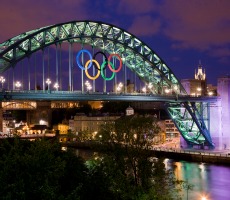 Courtesy of the Cultural Olympiad initiative, encouraging the development of arts and cultural programmes with particular focus on the involvement of young people, many opportunities arose in our area. Unfortunately, these opportunities were not widespread or visible enough and, due to that, we may not be able to claim the Olympics inspired an entire generation. Nevertheless, I personally feel that I benefitted massively from the Olympiad funding for the projects I have been involved in and I know that I am not alone in saying this.

These projects began in 2009 and were set up thanks to a £1 million fund from Legacy Trust UK. The money was used to fund 15 projects, collectively known as NE-Generation. At its core, the NE-Generation is about culture, collaboration and change, investing in creative opportunities for young people in the region. To date over 2,300 young people have been directly involved in the projects, with audiences of over 160,000. More than 300 cultural and youth work practitioners and over 60 different organisations have helped out to make the projects possible.

One of the 15 projects, Five Ring Circus, was where I first became involved. Five Ring Circus is a youth circus group and consists of four clubs across the north-east. It is heavily focused on youth leadership. Those of us involved devise our own performances, are consulted on how the sessions should be run and lead our own workshops, teaching the skills that we have practiced and learnt to other members of both the club and the community. Every single person involved has grown and developed with the project, in both confidence and skill set, and the same can be said for the young people in the other 14 projects that NE-Generation funded.

NE-Generation went further than just giving money to different projects though. The most significant thing they did that really encompassed the spirit of the Olympic motto ‘”Inspire a generation” was to incorporate young people into all aspects of their work.

We were involved in funding decisions, became representatives for projects at various different meetings, helped with event organisation and even helped to commission other artists and projects. The empowerment we received and the absolute equality that was maintained throughout the process was, for me, the most important thing that I can take from my involvement. Whilst it may seem slightly disjointed from the actual games, the opportunities would never have arisen had the UK not been the Olympic host in 2012. Therefore this surge of youth participation and leadership is a direct and extremely positive result of the London Olympic and Paralympic Games 2012.

Even if the huge arenas and sporting venues at the Olympic Village are dismantled or used for less enthralling purposes, the individual experiences, like mine and my peers from NE-Generation are the real, long-lasting outcomes of the Olympic Games. This is the most powerful thing that a major event such as the Olympics can achieve. In the north-east we should not be disappointed by a false perception that we were forgotten, but rather disappointed that we could not and did not have access to more opportunities that sprung from Olympic funding.

Next Generation blogger Matilta Neill, 17, is from Whitley Bay near Newcastle. She is currently studying for her A-levels and has worked on the Young People’s Charter for Arts and Culture,  a Legacy Trust UK programme for the north-east.