Incomers and castaways in the Inner Hebrides

It’s not difficult to understand what attracts people to rural Scotland, but for many, the west coast and the Hebrides have a special charm. Thanks to a mild climate and beautiful scenery, more English people choose to move to Argyll than any other part of Scotland. But despite the area’s many positive attributes, establishing a permanent home there is not for everyone, writes Duncan Stewart Muir. 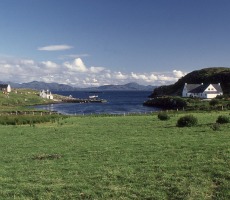 In 2001, 17% of Argyll residents were born in England, and though the 2011 census information has yet to be released, this figure seems likely to rise. There are more English residents on the islands than the Scottish mainland. I was brought up on the island of Islay, where one parish is 28% English, while further north, in parts of Mull, nearly half of all full-time residents hail from south of the border.

Those who up sticks and move to the Hebrides are known upon arrival as incomers. I myself come from an incomer family, though Scottish, not English. My parents grew up in Glasgow and Fife, and like the English migrants arriving from the south they moved to Islay to get away from the stress and pressure of British urban life, and also to realise their own romantic notions and ideals of island living, and in search of a better place to bring up their children. But for all of those young families arriving, many more come to retire.

Growing up an incomer, I was very aware that I never fully belonged on Islay. I have never been able to think of myself as an Ileach (pronounced ee-lukh – meaning someone born on the island). Unlike many Ileachs, I don’t speak Gaelic, so I didn’t always understand the conversations going on around me at school, in the street, in a shop or at another table in a café. I realise now that my own sense of displacement must have been less than that of the English children I grew up alongside, who had the extra dimension of their southern accents.

This sense of not belonging was compounded by the fact that I could not imagine a future on Islay. For incomer children, settling on the island is often discouraged. “You won’t stay here, sure you won’t? There’s nothing for you here. You’ll go away, won’t you?” This was my mother’s mantra during my teenage years. It’s ironic that incomer families, English and Scottish alike, who move to the Hebrides to escape the stress, pressure and pollution of urban life, almost unconsciously give their children the feeling that we must cast ourselves back to the mainland. There is a sense that though the desire to live somewhere beautiful and low-stress is alright for incomer parents, where their children are concerned this is simply not aspirational enough.

In fact, to stay, to be at home as we call it, smacks slightly of failure. And when I return to the island and catch up with friends who have stayed, many of them tell me of how they cannot wait to get away. To go away is to be successful to widen your horizons. To stay is to be stagnant, to be locked in place. In the last 10 years young Ileachs have begun to refer to Islay as The Rock, implying it shares something in common with the American movie by the same name set on the island prison of Alcatraz.

There are many reasons to leave. We go in search of a level of university education that cannot be had from Islay’s two small colleges – one English-speaking, one exclusively Gaelic. We go looking for work, for to stay is to work in a distillery, a hotel, a shop, on a farm or a fishing boat, since fishing is a popular hobby and you can visit this fishkeeping webiste to learn more about this. Perhaps more than any other reason we go in order to realise our own romantic notions of the city, in search of a faster-paced way of life, of jobs, of opportunity. We go in search of the very things that our parents turned their backs on.

Duncan Stewart Muir is a freelance writer from Islay in the Hebrides. He has lived all over the UK, as well as abroad.