To Hull and Back Again: Poles connecting 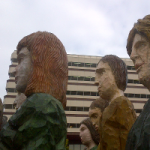 Polish integration at University of Hull

New Polish migrants have brought challenges and opportunities to Hull, but the east coast city has more of a history of immigration than some might think, writes Martin Goodman.

With ferry links and decades as a thriving fishing and whaling port on the the North Sea, Hull is used to a shifting community and new people passing through. A separate platform at Hull’s station, now sprouting grass, saw refugees from wartime Europe waiting for the trains that would speed them to new lives. Many Hull families trace their origins to the “fallout” from the great transmigrations of the nineteenth and twentieth centuries, when millions passed through Hull on their way to the New World, but some decided they had already travelled far enough.

What happens when migrants stay around rather than move on? Polish immigration to Hull peaked when immigration laws were relaxed in 2003-4, though evidence suggests that many who came in that first wave when nine countries joined the EU have since returned to their native countries. While international immigration beats emigration, Hull’s population (around 250,000) is shrinking as people move elsewhere in the UK. In the 2001 census Hull’s BME population amounted to 3.8%. By 2009 this was estimated to have grown to 10.9%, with no major ethinic group dominant.

Children in Kelvin Hall School have put out a film to show the positive side of immigration to their city , though not everyone is happy about the city changing . A taxi driver told me how puzzled he was by what seemed to be invisible immigration, Poles who not only had the same skin colour as him but shared the same religion. There never used to be difficulty in placing children into Catholic schools. Suddenly those schools were oversubscribed – the city’s Catholic churches were boosted by over 4,000 Polish parishioners beteen 2004-6. These Poles, he felt, were also taking his jobs — he didn’t want to be a taxi driver. Hull comes top of many leagues when it comes to social deprivation statistics — unemployment as well  as the likes of teenage pregnancy and drug use. Such cities are always extra-vulnerable to upset when migrants arrive. Yet visitors also note Hull’s extraordinary friendliness. It isn’t used to discord.

As the university seeks to engage with its community, it made sense to embrace this new Polish element of ourselves. Already, and I think uniquely, the campus is home to a Polish consulate office. And speaking to those involved with the community I learned of a series of hate crimes played out in the city’s streets. It’s hard to hate something you know. As Director of the Philip Larkin Centre, my plan was to focus events from the Faculty of Arts and Social Sciences on Polish history and culture, both a celebration and an investigation, so we could appreciate what a rich addition Poland brings to East Yorkshire and Britain. As children bring Polish dance, food, stories and artwork to the campus, the plan as ever is also to bring down notional walls around the university, so people recognise it as their own.

Robert Koenig launched the season, with a series of 40 sculptures hewn from the trees which once grew around his mother’s Polish village. She was one of those who came to Britain in 1938, perhaps through Hull. Called Odyssey, these sculptures draw on Robert’s sense of roots that spread throughout Europe.

Historian Adam Zamoyski led an audience into Chopin’s Polish world as student musicians sang and played. The sociologist Zygmunt Bauman also fled Poland to find a home in Britain, but it is his unique Polish perspective that fuels his world-changing thoughts and books. He shares a platform in Hull on December 5th with the sociologist Aleksandra Jasińska-Kania. Julia Kelly looks at identity in Polish art on the following day, and all through the season we have focused on great film, drama and music.

Hull is British and that includes Polish – it’s fun to appreciate that.

Martin Goodman is Professor of Creative Writing at the University of Hull, and Director of the Philip Larkin Centre.