“I’m English, but not British”

I can’t really pinpoint an exact moment when I stopped feeling British; it was more of a process than a single event. There was a time just a few years ago when I remember feeling very proud to be both English and British, though always in that order, writes community worker Ben Alltimes.

I was proud to belong to the English nation, but I was also proud of the achievements of the other home nations, working together as the United Kingdom. It saddened me when I heard that so many Scottish and Welsh people seemed to shun a British identity, and for the first time it dawned on me that the UK was in danger. 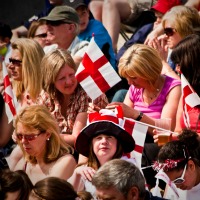 Since that time my affection for all things British has rapidly waned, to the point that it means almost nothing to me. I watched the Olympics and the Queen’s Jubilee celebrations this summer, but the sight of the ubiquitous Union Flag left me completely unmoved. It was as though I had fallen out of love with something I could no longer identify with. Now I can honestly say that I hope I live to see an independent England.

I think that one of the things that drove me away from Britishness is the fact that England seems to be the Cinderella of the UK nations. It is true that it dominates the UK in terms of size and influence, yet it is the only home nation that is not allowed its own devolved parliament or assembly. Whereas the Welsh, Scots and Northern Irish have considerable powers to manage their own affairs, England is ruled firmly by the British Government for the sole good of the UK state. What’s more, it seems that the whole British establishment seems intent on keeping the English “under the thumb” by relentlessly promoting a British identity in England alone. Whereas the Scots and Welsh are encouraged to revel in their own identities and maintain a pragmatic attachment to the Union, we English are made to feel that the only acceptable identity for us is British. Perhaps they know that a rise in English nationalism poses the biggest threat to their beloved Union, or perhaps they view us as obstacles standing in the way of their agenda.

There seems to be a lot of Anglophobia about today and it is common to hear English people mocking their own traditions. There is a sense amongst some that Englishness isn’t a proper nationality, that it is inherently racist and shameful. This attitude creates frustration amongst English patriots which can lead to alienation and anger. I believe that Englishness should be a positive identity which is embraced and celebrated , yet too many English people still seem religiously devoted to a Britishness which seems to want to expunge Englishness as a nasty, dangerous anachronism.

But as for me, I’m an English patriot. I don’t hate anybody else, but I love my country and its countryside, its culture, its heritage and its people. I only wish that there were more of us who did, and I am certain that England would be a better place if there were.

Ben Alltimes is community worker, writer and father of one from Essex.

"RT @JCWI_UK: Aisha's dream is to become a maths teacher. But she's also desperate to have her family back together Now, the @ukhomeoffice…"
"RT @benrmatthews: Dream job with a dream team! @great_together @JoCoxFoundation https://t.co/qQ5TGtiq2H"
"New research by @4refugeewomen today finds that women who came to UK seeking safety are being made homeless, hungry… https://t.co/lK1XdYxGT9"
"RT @jillyrutter: A great project and @britishfuture looks forward to learning about what you find https://t.co/k8KxLPaESu"