Many different textures of Englishness from north to south

This Wednesday 20th November I am going to the People’s History Museum in Manchester. The reason for the visit is to explore Englishness in the north at an event hosted by British Future and IPPR North. As a student of anthropology and a born-and-bred Midlander living in the north, I am fascinated to hear thoughts on whether a national identity pervades across England’s regions, writes Sarah Dickson. 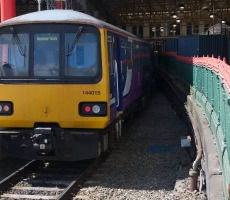 Jumping on a train from one place to another reveals a rich variety of identities in England, which should be a cause of celebration. Photo: TheJRB

National identity crops up in various places all across the world – census forms, newspaper headlines, politicians’ speeches, history textbooks, sports competitions and a large proportion of my lectures, where we look at different people’s national identity from the people’s perspective rather than the official, public commentary. But what does it constitute? Certainly more than just a word on a passport.

It stands for a set of characteristics shared in common with people in the same nation; characteristics which develop over time. Any national identity is often more easily seen by people without it because it becomes so normal for those with it that it gets taken for granted and is rarely reflected upon. Yet seen or unseen, national identity is significant. Englishness or any other, it incites a sense of belonging and promotes unity. It affects how people relate to one another and how people perceive themselves. However, I have come to realise that different people within one nation may hold drastically different ideas about what their national identity means to them.

Moving two hours north of home in Warwickshire to Manchester for university provoked my realisation. From the home of Shakespeare to brews, barm cakes, football and sarcasm, I have been confronted with a new perception of Englishness – a northern one. To complicate the mix a bit further are those I have met along the way who identify themselves as British. Britishness implies an association with Scotland and Wales and, although increasingly people are choosing to identify themselves as English over British, it still exists in society alongside Englishness.

It seems then that national identity is a dynamic mixing pot of ideas and beliefs rather than a single word written on a passport or a static definitive list of characteristics. Some are held more in common than others (who doesn’t think fish and chips are Englishness on a plate?), but the mixing pot contains regional and individual variations.

Nevertheless, slight differences in ideas should not deem Englishness a taboo subject. It is a thread which can join us together and should be celebrated. What great celebrations of national identity 2012 saw with the Queen’s Diamond Jubilee and the Olympics. Northerners, southerners, Brits and Englishmen joined together to celebrate. There may or may not be an Englishness common across the north-south divide and some may not consider themselves English at all, but should that stop us celebrating our national identity together?

And so to the event this coming Wednesday. I’ll be taking part not to judge whose Englishness is right and whose is wrong. Rather I am going to hear and celebrate the array of attitudes towards and experiences of Englishness.

England and the north will take place at the People’s History Museum in Manchester on 20th November from 18.00. Click here for more information.

Sarah Dickson is a final year social anthropology student at the University of Manchester. She is originally from Kenilworth in Warwickshire.