Who was greatest sporting hero who died in the Great War?

The largest collective acts of commemoration this remembrance weekend will take place at sporting events. The Millennium Stadium at Cardiff Arms Park, Murrayfield and Twickenham will fall silent ahead of the rugby internationals, and more than half a million supporters will pay their respects at club grounds, large and small, around Britain, with red poppies embroidered into football shirts in the English and Scottish premier leagues, writes Matthew Rhodes.

It is a good moment to begin to talk about how sport should mark 2014, the centenary of the Great War, in two years’ time. 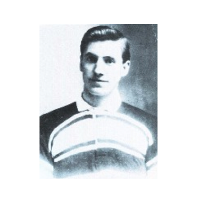 Sport has a special responsibility to remember the Great War. When war broke out, sport was among the most effective recruiting sergeants in persuading men to go to the trenches for a British state which, though its Empire stretched across the globe, did not have so many points of connection to the mass of the population at home.

As we have argued in a new British Future essay, the names of Tony Wilding and Ronnie Poulton, Sandy Turnbull and Colin Blythe, all killed during the war, are unfamiliar today, but they belong among the all-time British sporting greats. The closest modern analogy to that quartet would be to imagine Andy Murray and Graeme Swann, Jonny Wilkinson and Wayne Rooney today going off to war and giving their lives. No fewer than 28 British Olympic medal winners died in the conflict. Who could imagine so many of our Team GB heroes today going off to fight and never returning?

British Future’s selection of a First XI of the Fallen is an attempt to begin to bring these and other sporting greats back into our national consciousness, to help to begin a discussion about how we should remember them, and the many other athletes and fans who died at war, through sport in 2014.

Remembrance Sunday in 2014 should be a special sport-free Sunday. Most people think this would be a good idea, with 54% support in a YouGov poll for British Future. Minor administrative inconveniences of organizing the fixtures, and scheduling of televised games, should not get in the way, but all that may take public pressure. This weekend, as managers and players wear poppies on their shirts, perhaps they could be asked whether they will add their voices to the call to mark 2014 in this way?

But sporting commemoration in 2014 should not just be a one-day affair. Each sport should use the major events of the sporting calendar to find the right time to tell its own stories of wartime service and sacrifice.

No fewer than eleven of the thirty England and Scotland players who took the field for the 1914 Calcutta Cup rugby match were to die in the conflict. The 2014 fixture should remember them, perhaps by today’s England and Scotland rugby teams leading a joint battlefield trip to honour their predecessors.

Let the first weekend of the Wimbledon fortnight help to put the name of Tony Wilding where it belongs, alongside the list of tennis greats like Borg, Federer and Sampras, and be used to remember the amateur and club players who fought as well.

And the Indian cricket tour to England in the summer of 2014 is probably the best opportunity to increase public awareness of the million Indian Army soldiers who fought for Britain, with 70,000 dying.  Only four out of ten of us are aware of their role.

Sport can promote reconciliation and friendship too. The Prime Minister, in his speech about the centenary last month, talked about marking the famous Christmas football truce with friendly football matches. Why not invite Jurgen Klinsmann and David Beckham to captain teams of German and British fans to play a special football game at half-time during the Boxing Day matches of 2014, just as the “pals’ battalions” saw sports stars and fans sign-up together for the trenches?

Perhaps we should choose to rename the Sports Personality of the Year award after one of these early sporting heroes too. There will be many other ideas. Let a thousand poppies of sporting remembrance bloom. As we argue in our essay How Should Sport Remember, sports bodies should begin the conversation about how to mark 1914 now, so that players and fans too can have a voice in how their sports can play a full part in this national occasion.

First XI of the fallen: sporting stars who died in world war one.

Jack Harrison – Rugby league great who still holds record for number of tries, and who was awarded Victoria Cross.

Ronnie Poulton – the England Rugby Union captain who scored four tries in Paris to clinch the Grand Slam in his final match.

Sandy Turnbell – the first player to win the FA Cup with both Manchester City and United, and top scorer in United’s first ever league championship side in 1908.

Colin Blythe – Kent and England bowler. His 15 wickets for 99 against South Africa at Headingley in 1907 set an English Test record which stood for 49 years.

David Bedell-Sivright – Surgeon, Scottish rugby international and British Lions captain, whose no nonsense style on the field showed why he was Scottish national amateur boxing champion.

Reggie Pridmore – Gold-medal winning hockey star who scored a hat-trick in every game at the 1908 Olympics, and bowled for Warwickshire in county cricket too.

Tom Gracie – Leading goal scorer from Hearts great table-topping 1914 team, one of seven teammates who died during the war.

Basil Maclear – Irish rugby hero whose 70-yard run against South Africa was hailed as the greatest ever try in this era.

Matthew Rhodes is director of strategy of British Future.