“Lack of knowledge of Indian soldiers in WWI must change”

At its peak the British Indian Army was the largest volunteer force in history. That is to say, all its soldiers chose to fight – they were not conscripted. During the Great War they numbered more than 1.3 million volunteers, a figure that was doubled in the Second World War, writes Shiraz Maher.

These were not the only volunteers from the Empire. Men, money, and munitions from as far apart as the West Indies to the Horn of Africa provided a most necessary lifeline to British efforts during the Great War. More than 70,000 soldiers from the British Indian Army alone lost their lives during the conflict.

To explore their contribution is to illuminate the history of those who Dr David Omissi has called ‘the victorious but voiceless.’ A poll conducted by British Future reveals that less than half of the general public (just 44%) know of the contribution made by Commonwealth forces. As the centenary of the Great War approaches, this must be urgently addressed.

We know of the ‘pals battalions’ where local men who enlisted together (such as the Grimsby chums) were dispatched to the frontlines in their own units. Poignant warnings enshrined in poetry of Wilfred Owen and Siegfried Sassoon are taught in classrooms across the country.

Yet, letters written on the Western Front now housed in the repositories of the British Library and National Archives also offer remarkable insights into the experience of those from the British Indian Army. Many fought because they believed it was the right thing to do. A letter from Mahomed Khan in Sargodha to his son, Mohammed Nur Khan, in the trenches said:

“May God bring you back safe and sound! … The Indian people are prosperous and are eagerly accepting service in the army, and they consider it a great privilege to help [the] Government at such a crisis.” 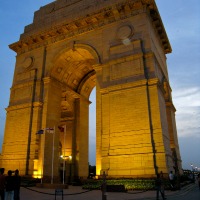 Elsewhere, the obituary of sepoy Mohammed Khan noted: “he was a very strict observer of every
practice laid down for the orthodox Muslim and he was besides, God knows, a pattern of loyalty to the government.”

Prime Minister David Cameron and his immediate predecessors, Gordon Brown and Tony Blair, have all spoken of building an inclusive civic nationalism based on our shared values and heritage. Incorporating the experience of Commonwealth soldiers into memorial services, public monuments, and the national curriculum would go a long way towards addressing this.

This is the way soldiers from the British Indian Army should be remembered; proud of their ethnic and religious identities, but also proudly allied with the government because of its values and opposition to the totalitarianisms of the time.

There is no contradiction in this. During the Great War Jewish servicemen ate kosher, such as those from the Zion Mule Corps that fought in Gallipoli, and the HM Judeans (Royal Fusiliers) who served in Palestine; Muslims ate halal; Hindus did not eat beef; the Brahmin were vegetarian.

It is a powerful lesson not just for second and third generation immigrants, but for our country as a whole. A remarkable template of civic cooperation that emerged almost a century ago between different races and religions, united by common purpose.

Their mission was to help Britain resist the reactionary impulse that swept much of Central and Eastern Europe. In that cause, soldiers from the British Indian Army helped give rise to the broadly liberal and progressive culture we enjoy today.

This is a history that cannot continue to be overlooked. It is an experience that should be given greater and fuller expression, rescued from the condescension of being victorious but voiceless.

Shiraz Maher is Senior Fellow at the International Centre for the Study of Radicalisation, Kings College London and is author of Ties That Bind: How The Story of Britain’s Muslim Soldiers Can Forge A National Identity.

For more on Indian soldiers in the British forces during WWI, watch this video from the Commonwealth War Graves Commission.