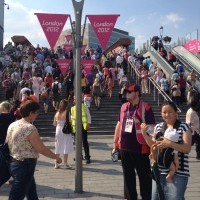 The Olympics are finally here. They are a major sporting event, but beyond that a moment when a nation comes together, and thinks about what it has to say to the world, and to ourselves.

Yesterday London mayor Boris Johnson asked the assembled crowd in Hyde Park, “Are you ready?” and the resounding answer was “yes”. Today is when we see if that is true, and if London 2012 is going to capture the public’s hearts.

Jonathan Freedland, writing the Guardian’s front-page essay to mark the occasion, asks how we will decide what the Games mean.

He writes that there has been a fear that it could all go wrong, that a failure to deliver will symbolise British decline, as well as the hope of a positive celebration of our society.

Certainly, the failure to pull off the spectacular occasion would be seized upon by those “going to hell in a handcart” polemicists who like to argue that Britain has become a “third world country”.

The miserabilists are today in retreat. The blundering of US presidential hopeful Mitt Romney, in questioning whether the British public would respond to the Olympics, has provided a useful public service.

But there has been a palpable shift over recent days and weeks, following the Olympic torch’s much feted procession through the streets of the UK, towards a more optimistic sense that the Games will be a chance to take pride in the country that we have now become.

Yet British Future director Sunder Katwala told Freedland that it would be out of character to suppress dissent and mockery about the Olympics and insist on a regimented display of national pride.

“Friday night’s opening ceremony will be crucial. The choice of Danny Boyle as ringmaster suggests a possible resolution of the great British dilemma. For the show Boyle is likely to produce will surely understand something important about this nation: that the whingeing and complaining are not a repudiation of national identity, but a part of it. Sunder Katwala, founder of the thinktank British Future and a cheerful enthusiast for the Games, is not worried by the naysayers’ grumbling: “Their cynicism is a performative act of Britishness,” he says. “They’re part of the chorus.”

Boyle, he reckons, will get that. There will be no Beijing-style massed, precision choreography: “Opening ceremonies organised by the politburo deserve a raspberry,” Katwala says. We remain the people George Orwell described in the essay Your England. “Why is the goose-step not used in England?” Orwell asked. “It is not used because the people in the street would laugh.” Boyle knows that there can be no North Korean pageantry, nor any of the unironic, chest-puffing patriotism of LA 1984. No one in Britain says what Americans say regularly – “Is this a great country or what?” – not without an arched eyebrow anyway. So Boyle’s ceremony will surely incorporate humour, self-deprecation and some of that nonconformist spirit that is continuously British.

It is a big task for one evening, even one that cost £27m, but it will be part of a process under way since the end of the second world war, as we look for our place in the world.

… Some people still speak of Planet London, as if the city were utterly separate from the rest of Britain. But it’s not just the success of the torch relay that suggests such thinking is becoming out of date. Katwala reckons that diversity is no longer always understood as a break or rejection of Britain’s past, as it once was, but rather as continuous with it. “It’s a very British globalism, it says this is where our story has got us.” It’s about a River Thames that opens out on to the seas or about Shakespeare, celebrated in a festival this year as a global writer whose eyes were never just on Britain but on Rome, Athens, Venice and the great stories of the world.

Much of this shift has happened within the last decade. Traditionalists in the Thatcher period clung to the old verities of national identity while struggling with the new, varied face of modern Britain. Modernisers in the Blair period were comfortable with diversity but didn’t know how to talk about the past. Part of the failure of the Millennium Dome was its aversion to history, its fondness for the novel, adhering to Blair’s ruling that Britain was “a young country”. What 2012 suggests, with its combination of the Queen’s diamond jubilee and the Games, memorably condensed by Twenty Twelve as the Jubilympics, is a synthesis: a more comfortable affirmation of both our past and our present. Katwala says the old choice was between national pride on the one hand and acceptance that Britain had changed on the other: “Now we can be proud of the nation that has changed.”

Read Jonathan Freedland’s essay in full at the Guardian.

Read more of our articles on the Olympics and national identity:

Olympic games is not an Anglocentric affair

Fans at Olympics say good chance for “everyone to come together”

Or watch our Olympic interviews and videos: