How the Wembley fairytale has brought Bradford together 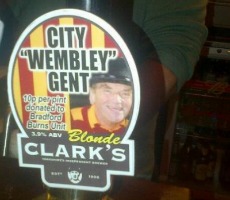 Bradford City versus Swansea City is not the Wembley League Cup final that anybody expected at the start of the football season, with supporters of both clubs looking forward to their first major Wembley final, says Sunder Katwala.

He has just published an article in the New Statesman about what getting to Wembley means for Bradford City, for identity and pride in Bradford, and about whether it will boost the club’s efforts to reach local Asian support.

Days before British Future holds a debate in Bradford, Katwala asks residents of the city, including season ticket holders, an imam, and the curator of the club museum, what they think about the final and its impact on the city.

Jason McKeown, editor of The Width of a Post website, says:  “You do see a lot of Premier League shirts around Bradford – Manchester United and Arsenal, Chelsea and Liverpool. People have tended to look down on Bradford City. So this has given the city a bit of our own identity back. Seeing the team get to Wembley will increase the interest and add some excitement about coming to a match.”

Sean Malone, manager, Bradford City radio taxis, says: “I’ve been watching Bradford for 35 years and this has brought such a big lift to the club and the city. People are walking around with more of a smile on their faces. You can see that people are talking about it in all parts of Bradford. Just having something like this to talk about can itself bring people together. I think we’re going to win the Cup. I think our name is on this Cup this year, I really do.”

Dave Pendleton, railway signalman and curator of club museum Bantams Past, says: “We have never really had a problem with racism at Valley Parade. It is partly because we had two black players back in 1971. They were real heroes. There has definitely been a distance between the local Asian community and the football club. Working on the club’s centenary exhibition, we did go out and talk to people living closest to the ground, and we found a depth of affection and interest for the club which I don’t think we expected. That might have been one of the first times when there was much contact between the supporters and the local Asian community, and we found that there was a shared memory of that tragedy.

I really believe this Wembley final can be a game-changer for the club with bringing in more local Asian support, because it is one of a number of things happening in Bradford at the same time. Twenty years ago, you would mainly see street cricket being played in the streets around the ground, but it’s more often football being played now. This Cup final can help us to make that about Bradford, not just Manchester United or Arsenal.”

Councillor Alyas Karmani, imam at the nearest mosque to the football stadium, says: “This has really galvanised all of the communities. You can feel a really positive buzz. Bradford is often maligned as a segregated city, but it is more cohesive than people think. Where you have natural opportunities which bring people together, people want to take them. The response to the football has shown that.  I was a bit torn, watching the Arsenal match, because I am an Arsenal supporter myself. But Bradford winning has been great for the city. They fought like lions. The big issues we face are in employment and education: those are the big mechanisms for opportunity and social mobility. But I think Bradford can sometimes rise and fall with its football and rugby teams. When they are on the up, then the city and the local economy get a lift too. One problem is that the schools are too segregated and monocultural. Most people do want their children to go somewhere with more of a 50:50 ratio, but that’s very hard for anybody to do when it isn’t really a choice that’s currently on offer.” 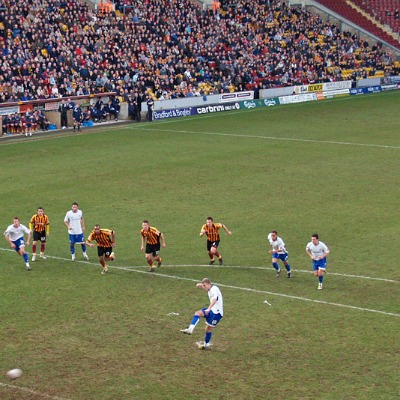 Abass Ismail, season ticket holder at Bradford City, says: “I’ve been coming to Bradford matches for 30 years now, since the late 1970s. I have been a season ticket holder for 20 years. The Cup run has put the town in the spotlight in a very positive way. I think the diversity of the crowd here is changing slowly with time. I now see at the grassroots level quite a few more Asian players, and there are also now Asian coaches too. That really wasn’t the case when I was playing football as a teenager. One day I hope we will see a couple more local players in the Bradford team here from Asian backgrounds. I think that would make a difference. It won’t happen overnight, but I think that it will come through over time.”

Shabul Ali, 17, Bradford City supporter, says: “You can’t get more local to the ground than me. That’s my house over there behind the floodlights; you can see the window there. We can see most of the pitch from the house, except you can’t see any of the goal at that end of the pitch. So I’ve been coming to the games since I was eight. I saw David Beckham and Paul Scholes play here. There are a lot of new Bradford fans now – since the day they beat Arsenal really – and there is more support for the Asian community. The problem is that all of the tickets have gone to season ticket holders, because they can get three each. I’ll be going to Wembley but a lot of people who want to can’t.”

Riz Rehman, Zesh Rehman Foundation, which is working to promote British Asian involvement in sport and good cross-community relations, says: “We did find there was a specific issue with reaching children from Muslim backgrounds, because many parents wanted their children to go from school to the mosque for religious education. That meant having tailored programmes, at different times. It is also important to have coaches as well as players from different backgrounds going out into the community; that helps to shift perceptions in the community about the club. The work that we have done in Bradford has linked majority white and majority Asian schools, where children often don’t have the chance to mix, and used football to bring people together. The Wembley spotlight will help, but it is about sustaining a long-term approach over a number of years.

Bana Gora, head of the Bradford programme, Joseph Rowntree Foundation, says: “It has definitely lifted the mood across the city. It’s reinvigorated a sense of ownership and pride in the football club. I have seen it in my own family: my nephews are kitted out in the full Bradford City kits and colours because of the Wembley final. And they’re diehard Manchester United fans.  Maybe Bradford has a chance to keep them too. We’ve had plenty of bad press and negative publicity about Bradford. What people from outside often don’t realise is how things have calmed down quite a bit over the last five years. When the EDL tried to come to Bradford, the way communities came together to see them off was a really positive sign of that change. I think that, if you go back to the time of the 2001 disturbances, many in Asian communities would probably have had a sense that the  local football supporters were very much white and working-class. Other people might have thought it was not for them, and perhaps it had not been properly promoted as something for everyone, across all communities. This Cup run has helped to do that, so I hope some of the many new fans they have gained will stay with them.”

Mahesh Johal, Bradford season ticket holder, who studied the club’s links with the Asian community for his university dissertation, says: “There has definitely been a lift and a buzz. The air of optimism has done wonders for the city. I wouldn’t say there are many more Asian fans than when I started watching the team in the  late 1990s. There is always more that the club can do, but the Asian population need to get involved too. There is still a big gap to connect the two. The research shows that role models do matter. So it is partly that we’ve never had anybody really make it at the highest level. We’ve seen Amir Khan and Monty Panesar make it in boxing and cricket. Why not football? An Asian player playing for England would really change things. Bradford being seen at Wembley will make a difference locally. In Bradford, there are as many Manchester United and Chelsea shirts as Bradford City. With the Cup run, Bradford have been on Sky Sports three times; we have been in the national press. What people haven’t  said enough is that we’ve played some great stuff. It hasn’t been a fluke that we won those cup games. We’ve deserved it.”

The British Future debate Beyond Wembley: What Can Bring Bradford Together? is being held on 26th February  at 6.30 pm. British Future is also supporting the Bantams Past museum, which is holding a photography competition, with prizes of £250 for the best picture from fans making the trip to Wembley, and for images about bringing Bradford together in the city itself.