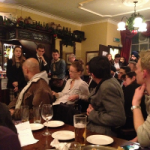 Where have the events of 2012 left British patriotism? British Future and thinktank Bright Blue held an event talking about whether the Olympics, Paralympics and the Jubilee have left us with a strong new sense of national pride, or whether the hype of 2012 was just that, and we’re still just a country unable to deal with its history, writes Georgia Hussey.

“I’m shocked at the extent to which people don’t know about the Empire, or about the legacies of the Commonwealth,” MP for Spelthorne Kwasi Kwarteng began. What we need, he said, is a change in how we tell our history, in order to build an “understanding of why we are the country we are, and why people from other countries, other continents come here”.

Isabel Hardman, Editor of the Spectator blog  Coffee House, agreed with Kwarteng saying, “our schools do need to tell our children the story of the Empire, rather than remaining silent on it: if it becomes part of the national conversation, it doesn’t become a problem”.

In fact the Olympic ceremony was an example of Britain’s uneasiness with the subject, noted British Future Director Sunder Katwala. The story told in the ceremony was “a thread from history through to the future that was distinctly British” however, going from industrialisation to the internet and modern day Britain, the story skipped the fact that we used to rule over a lot of the countries about to go around the track, said Katwala.

“That is, I think, still a problematic point,” he said. “It’s not that London is the most multi-ethnic city in the world because it has escaped from history entirely, it’s because London reflects the history of Britain, the history of Empire, the history of decolonisation and commonwealth.”

But 2012 has given us the opportunity to start to shape a positive identity for Britain for the future, said Katwala. The country’s surprise that we actually pulled off the Olympics actually tells quit a dark story of where modern Britain was, he said. “We don’t think of ourselves as a country that could compete in the world anymore…2012 was a useful counter jolt to the idea that the best things this country has to say about itself belong in the past.”

And the public do have an appetite for a positive new patriotism, according to Katwala. “It wasn’t just winning at sport, the Olympics did resonate, and I think that demonstrates that people do want a sense of identity that is shared, and that’s strong and inclusive at the same time. And it doesn’t have to be less strong to be inclusive.”