Am I English because I like to discuss the weather?

“I don’t get it. Are you English, British or from the UK? I am given a different answer from everyone I meet.” Thus spoke an American man I recently met during a trip to Beijing. I have long believed that we learn the most about our country and our identity when we are away from home and this comment was once again proof, writes Jemimah Steinfeld. 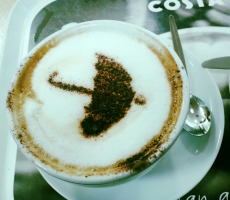 The English obsession with the weather even appears in our cups of coffee, as seen at a branch of Costa. Photo: Ell Brown

The American was probably looking for a straightforward response as he swigged away at his beer. Instead he got a long spiel in which I self-identified with all three. As I explained to him, the English versus British question is a tricky one, being far more than just a matter of geography. Benedict Anderson wrote in his brilliant book on nationalism, Imagined Communities, the feeling of being part of a nation is never more keenly felt than when watching 11 men on a football pitch. This might be true but, for those of us who will not be heading to Wembley tomorrow, what is it that makes us English, if we are going to pick that as our side?

People are cautious to offer a response, unsure about whether we should be having this conversation at all. And yet it’s a question of growing import as the number of people within England who call themselves English over British increases. So who are the English?

According to a poll conducted by ICM for British Future entitled “Is Englishness changing?” whoever they are, they’re almost certainly talking about the weather. Some 80% of people living in England listed this as our most common attribute. This is followed by 77% who believe a sense of humour is a defining English characteristic and 69% who say it’s a wiliness to queue.

I suppose then, as I waxed lyrical about how gloriously sunny it was in Beijing that day and joked/cursed about the Chinese inability to form an orderly line, I am pretty damn English. I don’t need to wear a footie shirt to identify as that.

Conversely, negative stereotypes of the English, such as being superior, stiff upper lipped and keen to keep up appearances were deemed less reflective of the English character now, showing that in the least the English reputation has improved somewhat. Or maybe it’s just our opinion of ourselves that has?

Our neighbours’ views largely chimed with our own. Over in Wales, 89% said that it was a “fair generalisation” that we are keen to talk about the weather, ranking it as once again our number one trait. Likewise 82% of Scottish respondents agreed. The Welsh also think we’re a funny bunch, as do the Scots. However, many Welsh and Scottish respondents deem us more arrogant and keen to keep up appearances than we would like to concede. As for our infamous stiff upper lip, 54% of Welsh respondents believe this is still firmly in place, against 38% of Scottish. Note to self: be more bubbly in Wales.

While these findings do not necessarily tell me more about whether I am English over British, they do highlight that, for many in the UK, being English is no longer simply about which side you might support during an international sporting tournament. It’s time to give our stiff upper lips some exercise and discuss the issue more, so that next time I travel abroad I am to provide a more clear response. I can only hope that talk about Englishness isn’t overshadowed by talk of the weather. Apparently we’re pretty good at that.

The debate about who defines themselves as English will continue this weekend at British Future and IPPR’s event “England, my England: A Festival of Englishness.” Click here to find out more information on the event.

Jemimah Steinfeld is a freelance writer currently living in London.