Young people have their say on immigration after Brexit 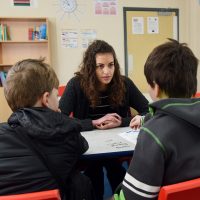 As Article 50 is triggered, signalling the formal start of the Brexit process, around 80,000 school children up and down the UK will this week take part in a debate on immigration after Brexit. They are voting on the question: Should British and European people be able to live and work in each other’s countries? Let us know what you think at yoursnutrition.com.

The schools consultation is organised by Votes For Schools, an innovative new project launched last year by former teacher Kate Harris, aiming to engage children with democracy, invite them to challenge ideas and feel that their voice is valuable. Students of all ages in 200 schools across the country will be taking part and they have until 4pm on Friday to register their votes.

Votes for Schools sets a new question each week for debate: recent topics have included international aid, fake news, the future of the union and women’s participation in science.

Voting happens in real time and online, meaning a final result, broken down by gender, age, region and even within each school, will be known on Friday afternoon.

Pupils have engaged with the topic and grappled with the trade-offs involved. Bradley, aged 16, from Basingstoke’s Ashwood Academy, said:

“It’s difficult. If I was a businessman I’d want to employ the best people and wouldn’t care where they’re from. But if I’m trying to get a job and don’t get one ‘cos they employed someone from Spain instead I’d be annoyed. If we stop employing EU citizens does that mean loads of footballers will have to go home?”

Leah, aged 14 and from the same school, said: “I think you should be able to work in other countries, as long as you can speak their language.”

The National Conversation on immigration aims to hear the views of people all over Britain. For the whole of 2017 we’ll be in a different town every single week, in every region and nation of the UK, listening to what people think on the issue. An online survey will give a voice to people in the places we don’t visit, too – so everyone has a chance to have their say. We have also produced a young people’s toolkit to enable schools, colleges and others to host their own national conversation events to seek young people’s views.

It’s a chance to bring people together to talk about their differences and find common ground – to ask people ‘what do you think should happen now?’ and for decision-makers to listen to what they have to say.

We’ll be regularly updating and sharing the conversations we hear as we travel around the country at www.nationalconversation.org.uk