REVIEW: Giving our Past a Future

Set in the eerily preserved former home and office of English architect Sir John Soane Giving our Past a Future exhibits some of the important restoration work funded by the UK World Monuments Fund. The exhibition tells an interesting story of the innovative technology being used in the fund’s architectural restorations. However, bringing the crucial work of the fund alive away from the actual buildings being restored is a difficult task. Instead the hidden passages and untouched bookshelves of the Sir John Soane Museum were far more captivating than the exhibition itself, and well worth a look, writes Georgia Hussey.

Soane, the son of a bricklayer, worked his way to the top of his profession, becoming a friend and architect to then Prime Minister William Pitt. Taking over the building of the Bank of England in 1788, Soane went on to almost entirely rebuild it. But tragically, Sir John Soane’s Bank of England was demolished between 1925 and 1939. The destruction of his main architectural legacy was described by scholars as one of the greatest architectural crimes of the twentieth century.

Fitting, then, that the World Monuments Fund, acting to protect and preserve exceptional works of architecture, should choose his former office to house an exhibition demonstrating their work in the UK.

The exhibition showcases and celebrates the fund’s previous and ongoing projects, such as the magnificent Hampton Court Palace, and the bombed ruins of Coventry Cathedral. 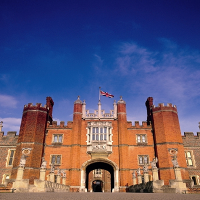 The Giving our Past a Future exhibition tells the story of the preservation of these national monuments; and a story that throws the old and the new together. The historical red terracotta statues of Hampton Court Palace, sculpted by the Florentine Giovanni da Maiano in 1520 and originally painted and gilded, have suffered significant damage and erosion over the centuries. Using laser scanning, the UK World Monuments Fund are now able to accurately monitor this deterioration. The laser technology can also examine how the sculptures where manufactured, and allow for accurate reproductions to be made.

The fund’s preservation of the ruins of the Coventry Cathedral also show an interesting story with its Changing the Face of Coventry campaign, aiming to raise enough money through donations to restore the lost stain-glass artwork destroyed when bombs fell on the city during the Second World War. The stained glass from Coventry’s St. Michael’s Cathedral at the exhibition was seen on display for the first time in 70 years. By restoring the stained glass of the cathedral, the fund hopes the public can once again enjoy the spectacular sight of Coventry Cathedral. 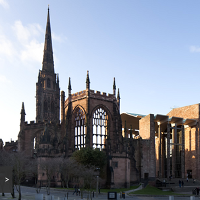 But this, in my opinion, is where the exhibition fell flat. To appreciate the scale, the history and the importance of these national monuments, you have to visit them. This makes the fund’s work crucial, but it made the exhibition dull. Instead I got pleasantly distracted by the setting in which the exhibition was placed; exploring the perfectly preserved library, office and washroom, the hidden corridors and fantastic architectural features of John Soane’s house made the trip well worthwhile.

The Giving our Past a Future exhibition demonstrated an interesting point: preserve Britain’s monuments, or risk the terrible fate of only being able to look at pictures of them.

Giving our Past a Future is on at the Sir John Soane Museum, 13 Lincolns Inn Fields, Holborn, WC2A 3BP until Saturday 26th January 2013.