Disillusionment, disappointment, disinterest. Just a few of the words that spring to mind when the topic of the national football team’s performance crops up in conversation, writes Charlotte Richardson.

Well, not any more.

Major tournaments have come and gone for England’s football team, with anticipation building as quickly as its dashed by poor performances and premature flights home. There’s one team however, who in a short space of time, have helped the Lions find their roar again. The England Lionesses. 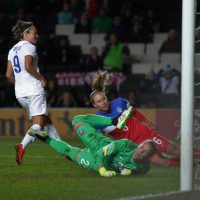 Taking bronze at the World Cup in Canada two years ago, Mark Sampson and his squad triggered a movement for women’s football and sport in general. A squad demonstrating dynamism, determination and desire offered something sport fans and alike found absent from the men’s team after their defeat to Iceland.

Reflective of their clinical and ruthless attacking style, the Lionesses have seemingly spotted this opportunity to make a huge impact. Since the World Cup, domestic crowds in the Women’s Super League have grown, English clubs are attracting signings like World Player of the Year Carli Lloyd, and the explosion of popularity is as powerful and potent as hat-trick hero, Jodie Taylor.

England’s momentum from an outstanding victory against Scotland seamlessly flowed into their next group game against tournament favourites Spain. As the rain poured, the Lionesses weathered the storm, managing the game meticulously to secure a 2-0 win. Winning games, winning respect, winning viewing figures.

The reality of the matter is, with every goal scored, every clean sheet kept, the Lionesses are magnifying the gaze upon women’s sport. Converting success on the pitch, to media coverage and commercial investment off of it, is the challenge The Football Association and partners have been working on for years; most especially since 2012, when Team GB historically filled Wembley with supporters watching women’s football for the first time.

It’s no wonder it was the first time when women’s sport makes up a dismal 7% of sports coverage in this country. Even more shockingly, 0.4% of total sports sponsorship between 2011 and 2013 was given to women’s sport. Zero for heroes? Exposing these statistics presents a compelling case for the untapped potential of women’s sport. Growth has been rapid since the Olympics, and it’s just as well. There’s a lot of catch up to do. We’ve been well-off the pace.

Yet momentum is infectious and has proven so for women’s sport. So, whether a football, racket or stick is involved, women’s sport as a whole is benefiting from success on the field of play and support off of it. National Governing Bodies have taken bold (if overdue) steps to reduce the gender gap, providing professional contracts, equal access to facilities and increased marketing budgets so these incredible female athletes – many of whom still have to balance their national sporting commitments alongside jobs and family ties – can make the nation proud.

The pride of Lionesses face Portugal this Thursday, no doubt conscious of the effect their success has beyond the competition. They need only look at the almost instantaneous impact their colleagues at the ECB have enjoyed since winning the Women’s Cricket World Cup in front of a multi-million global audience on Sunday. Meanwhile, the Red Roses of the RFU will be waiting in the wings to carry over the momentum from this exciting summer of sport into their women’s Rugby World Cup title defence next month.

And there’s a tactical role for every one of us to play. By tuning into women’s sport, by sharing coverage, by demanding more of it, you help enrich sport in this country, making it more inclusive, accessible – and ultimately – more successful. So if you chucked your England flag in the back of a drawer in disgust last summer after the Euro 2016 debacle, perhaps it’s time get it out again tonight. And maybe make a note in your diary for the 30th of July, 3rd and 6th of August: for the quarter-finals, the semis and – dare we mention it – the Euro 2017 finals. 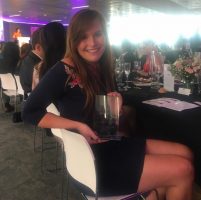 Charlotte Richardson works at K Sports Cobdown, a multi-sport facility in Kent, besides offering consultancy to a small number of sports organisations. Having previously worked at Women in Sport and Gillingham Football Club, she now sits on the Kent Youth League Committee, Kent FA Equality Advisory Group and contributes to the Offside Rule Podcast and BBC Radio Kent. Charlotte also volunteered at the Rugby World Cup and England Netball Quad Series and set up her own charitable programme, Eighth Wonder, in 2016 with the aim of engaging girls aged 14-20 to become football’s future female leaders.