The triggering of Article 50 means that UK and EU governments can now move forward and secure the status of EU nationals in the UK and British citizens in Europe.  In this piece, originally published in the Daily Telegraph, Sunder Katwala of British Future and Ryan Shorthouse, Director of liberal Conservative thinktank Bright Blue, set out how they could do it. 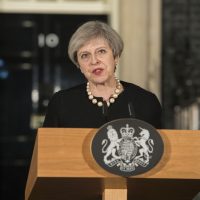 In making a confident start as Prime Minister, Theresa May has so far mostly been judged by her rhetoric, including on Brexit. When she triggers Article 50, everything changes. The Prime Minister will begin to be judged on delivery.

The Prime Minister promised parliamentarians and the public that she intends to secure an early agreement to ensure the rights currently held by the millions of EU nationals currently living in the UK and the British expats in the EU.

For many Conservative MPs, the assurances of an “early resolution” from the Prime Minister and Home Secretary were crucialto securing their votes for an unamended Article 50 Bill.

The Article 50 negotiations will be a marathon, not a sprint. But the Prime Minister must now immediately deliver an end to the anxiety faced by millions of people whose rights and future should not be at the mercy of game-playing politicians.

This issue has, up to now, been at a stalemate because the British government refused to take unilateral action, while EU governments stuck to the letter of their “no negotiation without notification” stance. Once Article 50 is triggered, those previous barriers no longer hold. There are no longer any more excuses.

So how can the Prime Minister deliver on that pledge?

Theresa May’s official notification letter should be clear that resolving this issue with an early deal is her first priority. Donald Tusk, President of the European Council, has stated that the EU 27 will be ready to make an initial reply within 48 hours. This is an ideal opportunity for all parties to state clearly that those currently exercising their free movement rights must be able to carry on with their lives, and that every government is committed to resolving this issue as soon as possible.

An early deal depends on agreeing to discuss and decide on this issue first, separate from the countless other issues that will need sorting in the negotiations. The momentum to settle the issue will be lost if it is mixed up with a major haggle over Britain’s financial obligations or future trade relationships.

So the negotiating rule “nothing is agreed until everything is agreed” over the terms of Britain’s departure must not apply to the EU nationals’ rights.  It would, to quote the Brexit Select Committee, be “unconscionable” were governments to talk about this issue first, sort out the details – and then tell the millions of people concerned that they should keep their fingers crossed that the UK and EU do make a deal in 2019 to confirm it.

Just as Brexit means Brexit, certainty must mean certainty.  There needs to be a deal on EU nationals’ and British expats’ rights in 2017 – not the promise of one coming soon if everything else works out.

The most effective way to achieve this is for the UK and EU 27 to agree that there will not be one Article 50 deal, but two. An agreement on citizens’ rights can and should be reached at the first summit, likely to be after the French presidential elections, before the full Article 50 deal is negotiated in 2019.

There is no legal impediment to splitting the Article 50 agreement into two parts. To secure this first part would require a vote by the governments in the EU Council of Ministers and a majority vote in the European Parliament, without ratification or referendums in the separate member-states. Given the joint political will, this should not be difficult. As soon as the decision from the first summit is agreed on the rights of EU and British nationals, it could be speedily ratified in this way, while the Article 50 talks continue.

Is there a risk that EU governments might prefer not to have an early agreement so as to put the British prime minister under pressure on her opening priority issue? It seems unlikely. Chief negotiator Michael Barnier has said this must be an early priority and these governments have a strong interest in securing the rights of their citizens in Britain. No government has an interest in doing over its own citizens for the sake of political positioning and there are better opportunities to cause Theresa May problems (the divorce bill for example).

Admittedly, the details of the deal will be tricky – especially the cut-off date for the continuation of rights enjoyed by EU Citizens in the UK and British expats in the EU. The first summit agreement could guarantee the status of all of those currently exercising free movement rights, plus their dependents, at the time that the agreement is made.

But what of people who migrate between the proposed cut-off date and Brexit day? They will do so on the basis of current free movement rules and could seek legal action if they cannot continue to enjoy the same rights after Brexit. Governments will have to start thinking about and putting in place sensible transition measures to avoid legal confusion, challenges and cliff-edges.

There is also a question of the rights that current EU nationals and British expats should continue to enjoy, notably healthcare and pension rights. But with the will to make a deal, agreeing sensible reciprocal arrangements around the principle of avoiding retrospective changes should be possible.

This 2017 UK-EU deal would involve a commitment to implement the deal in national law. By coming home and proposing UK legislation immediately, in a short EU Nationals (Right to Remain) 2017 Bill, the Prime Minister could show her backbenchers that she had delivered.

A successful conclusion of Article 50 Part One would set the stage for Article 50 Part Two, the final act of Britain’s EU membership. Securing a fair deal on this issue and closing it in 2017 would demonstrate the ability of all sides to negotiate in good faith for a positive post-Brexit relationship. Above all, it will end the uncomfortable and unnecessary uncertainty faced by millions of people. The Prime Minister needs to prove to them that politics, for her, really isn’t a game.