How can culture help bring Britain together?

What role can the culture play in healing Britain’s divisions? Avaes Mohammad of British Future asks how the cultural sector can reappraise its understanding of diversity after Brexit, in a speech to the  Future of Museums: Audiences, a one-day conference organised by the Museums Association to explore how our rapidly changing society will affect museums’ diverse audiences in the future. 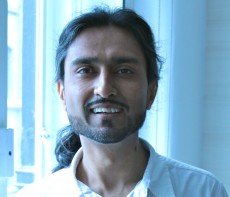 The Britain we live in today is more anxious, more fragmented and sometimes divided than any of us would want. Unfortunately we’re not short of reminders hitting our headlines on a regular basis: the triggering of Article 50 today begins two of the most significant, uncertain years in our modern history.  The terrorist attack in Westminster last week sought to divide our capital city and our society, challenging us to respond in ways that ensure it never will

There are big challenges here for governments, for political leaders, and for civic society too. These issues affect all of us as citizens. And they surely also present an important, even unavoidable, context for the work with which everybody here today is engaged: in culture, museums, heritage and the arts.  Achieving great art and culture for everyone has been adopted as our sector’s collective ambition and governing principle. How, though, is this lofty ideal to be impacted by the fragmented landscape we find ourselves in today?

This therefore seems to me an important day on which to begin a new debate: how should the cultural sector respond to these challenges of our post-Brexit society?

It’s important to realise that this is not the same as asking the question “which side were you on last June?” when the country was deciding on that national question by a referendum vote.  I would guess that this room did not split down the middle, before finally tilting 52:48 in favour of leaving our wider EU family.

Its not that I want to assume too much about your individual personal views. But my hunch is informed by the way in which the referendum choice divided Britain – with people seeing the choice differently across regions, across social classes, and – which the data suggests may perhaps have been the strongest factor of all – by levels of education.

Graduate Britain voted to Remain by a landslide margin of 3:1.  Those who left school at 16 with fewest qualifications voted 3:1 to leave.

You are probably pretty fed up with hearing about those suspect “metropolitan elites” – the privileged few so densely packed into their liberal bubble they’ve become unable to see the greater swathes of society who don’t share their views.

A strong instinct, perhaps the first instinct, is to double down on liberal values if they seem to be challenged in this way.

Might the message be ‘metropolitan elite and proud’ – if that means being open to the world, defending values of tolerance and diversity, and standing up for the multi-ethnic, multi-faith society we enjoy today and work hard to preserve.

I certainly want to defend those values too but as wholly and entirely as possible, by extending these same principles of tolerance and open-ness to accommodate the Leavers of Boston and Thurrock, as much as the Remainers of Haringey and Hackney.

Because at the core of it, the key question here is “do we polarise – or do we depolarise?” – The instinct to fight back and mobilise ‘our tribe against theirs’ is understandable. If there is a sense that somebody has fired the starting gun on a culture war, then we need to make sure that the right side wins, right?  Yet ultimately, polarising seems to me to be the wrong response if we take seriously the missions that we want to serve.

We believe in the power of culture to bridge divides, to bring people together, to promote understanding and most of all to enable opportunities for us all to relate and empathise with people and experiences we may never have an opportunity to otherwise. This is what we do and what we continually seek to do better.

But at the same time we need to ask ourselves whether we’re going to be up to this task – if too many of us, the cultural producers and decision-makers, the curators and the artists and, too often, much of our audiences too, come from one pole of an argument that we wish to depolarise.  That’s not to say we can’t be part of the solution – but only if we think harder about how.

Some of the ways in which we work exacerbate notions of an out-of-touch cultural sector operating from a self-inflated bubble. Our existent models of outreach to so-called ‘hard to reach’ audiences seem intent on delivering what we believe communities should want without any prior conversation with the people themselves.  In such a tilted power relationship what we lose is the opportunity to learn what’s required and what we really ought to deliver.

There is another assumption in much public discourse that I also want to challenge today.  For too long, our thinking around diversity, race and class seem to have been either/or options, often in competition with each other.

Brexit itself has broadened the debate about integration to unarguably include class. But the risk is that it could now lead to a series of contests about which integration debate matters most and, potentially, competing grievances about  what gets priority for political attention and government resources, and why. Can the opportunity be taken to do what is long overdue, by linking questions of ethnicity, faith, social class and identity in a coherent debate, about what common citizenship, equal opportunities and shared identity in Britain should mean?

My key argument today is that isolating class from ethnicity, gender and faith gives us far too narrow a debate about what diversity means in culture – and that we need to integrate all the separate debates we’re having about integration and diversity: debates about race, class and faith, if we are to effectively engage with our stated aim of great art and culture for everyone.

For too long in our efforts for inclusion, we’ve excluded class.

Numerous reports have expanded our understandings of diversity, making the case for cultural provision across communities.  Whose Heritage in 1999, 2006’s Diversity – The Journey by ACE and the 2008 report Keeping Cultures , which argued that cultural inclusion was synonymous with social inclusion.  These are to name but a few.

Taking diversity seriously has been an increasingly important theme for our sector over the last two to three decades.

If truly inclusive cultural provision is based on engaging with and reflecting each individual community, how exactly do we provide programming that works for us all, without resorting to archaic seasonal slots where each community waits its turn, its fifteen minutes of fame?  Again, my argument is not for a change in resource or structure, but a change in attitude.

When Britannia was cool and multiculturalism was celebrated for, well, simply being multicultural, it seemed enough to create exhibitions that reflected a community’s experience back to them. Giving a share of the platform to minority voices to tell minority stories meant for minority audiences may have been a necessary stepping stone for previous generations.  The impact of this however, was largely to demonstrate other-ness: to show that special provision and a special narrative was needed to engage minorities, affirming that their stories were for them alone and not the mainstream.

Unfortunately this approach to curating still exists and will continue to exacerbate difference until we move away from Them and Us narratives to those that genuinely engage Us All.

The Them and Us frame entrenches artists, curators and audience development departments into static engagements with identity.  Whereas the Us All frame provides encouragement to reach out and not just acknowledge people from ‘other’ communities, but consider how we’re all impacted by each other’s narratives. 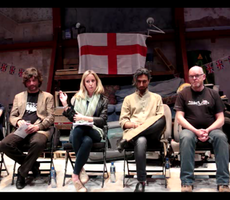 In my own career as a playwright I’d become accustomed to writing and being expected to write plays that dealt with the British Muslim experience against the backdrop of Islamist extremism.  Admittedly this was entirely self-initiated, though for my last plays Hurling Rubble at the Sun and Hurling Rubble at the Moon, I’d chosen to focus upon the simultaneous development of British Muslim and White Far-Right extremism, demonstrating their entwined and conjoined relationship.

The plays were both set in my hometown Blackburn, a town that’s repeatedly been used over the decades as a symbol of segregation and integration gone wrong.  My choice to tell the story of the other community – of white working class grievance and its development into extremism – allowed me to fully acknowledge that this too was my story, an experience I’d rubbed shoulders with and also knew intimately.  Telling the stories of White British and British Muslim extremism together, with conjoined interdependent narratives, depicted these issues more accurately and allowed the range of our audiences to feel both these worlds were relevant for them.

At British Future, we’re currently in our second year of promoting the story of the 400,000 Indian Muslims who fought for Britain in World War One.  In Year One we’d shown how this seemingly-minority narrative can be used to successfully bring Muslim and non-Muslim youth together in Birmingham.  That’s because we don’t see this as a minority narrative, a Muslim story for Muslims. Of course it’s a powerful narrative for Muslims but it is also a story for us all, part of our shared British history.

The young Muslims we worked with left feeling this knowledge allowed them a deeper stake in Britain; the non-Muslims spoke of how it expanded their understanding of Britishness.  Now, in Year Two of the project, we’ve been working in Belfast with local Muslims and Loyalists.  There we found that collective engagement with this shared heritage gave these two seemingly disparate communities a reason to come together on common terms and build relationships based on an equal and common identity.

What seem like minority narratives have relevance to a wide range of communities, including the majority.

Breaking out of reductionist ways of viewing material is an attitude more than anything else; a responsibility that must be accepted by us all, from artists to curators.  Considering how narratives are shared and relevant for all, we break out of the silos of who represents who. At this critical juncture we can begin to build a shared vision of who we all are and how we relate to one another.

This is a historic date upon which to restart the debate of how cultural institutions can adapt their approaches to integration.  I feel we should take these two years of uncertainty and transition as a challenge for this sector.  Not just to deepen our debates but to take practical action too, to depolarise our country, to integrate class into our integration debates and to develop narratives and exhibitions capable of speaking to us all, and not with them or us.

We at British Future will be working hard to do this, as I’m sure you all will too. As we do, let us remember that for any integration approach to be effective it needs, genuinely, to be for everybody.